I've been reading about this for a while, but haven't found the definite way to do it. I have Ops center running on a global zone on a T4-2. I have two other T4-2's to work as Oracle VM Servers for SPARC and create/provision LDoms as requested by our production team. Thing is, I need a separate network to provision the OS since I can't have DHCP server enabled on the public LAN. I already installed the switch and connected all servers (see diagram below). I can provision the OS fine when using only an interface on the private network, then configuring IPMP manually after provisioning. But I really want to provision the OS in a way that IPMP is already configured for two interfaces on the OVM servers. This is needed in the case of the LDoms as well when we get to that stage. Oh, in the image you can't see it but both OVMs are seeing several LUNs for virtualization.

Now, I need the following to be done

3. Ops Center Management should be preferably done on the public network (I read this is possible by using agentadm -a)

4. Granted that I create libraries for metadata an static block library for virtualization, provision LDoms the same way (via the private network with IPMP configured over VLAN-tagged interfaces) 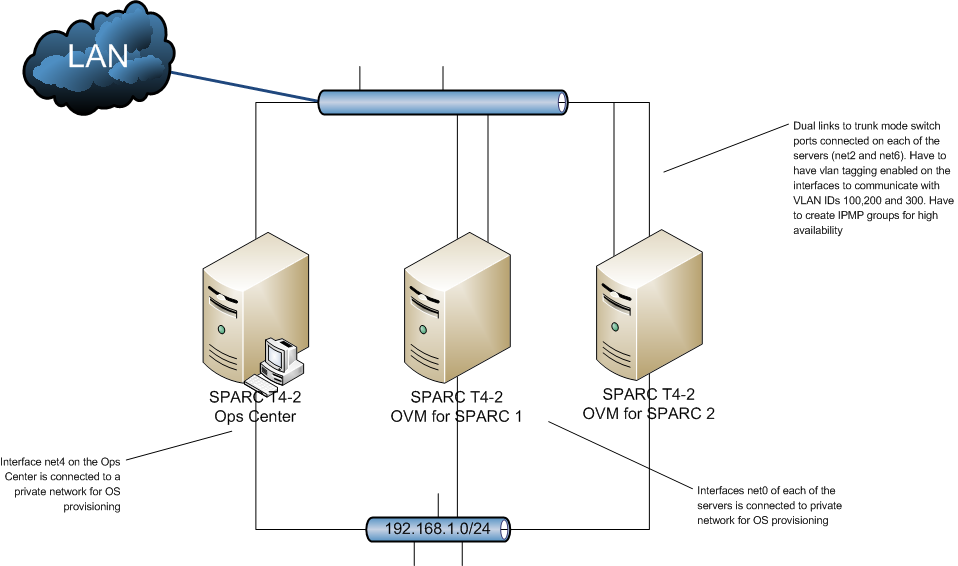