We have some forms in which we are producing fairly simple indented views of dimensions.

We have noticed that under Chrome the indentation is screwy - parents appear to be indented beyond the children. This does not occur when the same form is viewed under IE and Smart View.

In Chrome the hierarchy appears as below: 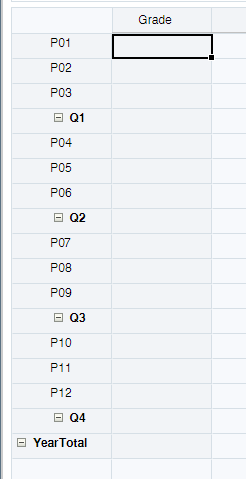 Whereas in IE we see the following:

Which is what I would suspect.

Support have not been very helpful asking us to restart the service and clear the browser cache,

PBCS is running the latest patch sets and this has occurred for over a number of months and does not therefore appear to be a recent patch issue.

I don't think we have used any odd settings in the forms - and would expect something like this to maybe affect all presentation methods.

I have reproduced the issue on the period dimension above as this is a fairly small, simple dimension. We do have an alternate hierarchy but nothing else of note.

Has anyone else encountered this issue?