Long gone are the days of installing Linux from floppies! As the OS has matured, it has grown up... and out. Recent versions of Linux are now 64-bit binaries only, and those binaries are bigger than their 32-bit predecessors. Recent versions of Oracle Linux contain more packages than older ones.

As Linux grew it became a challenge to contain the distribution within the boundaries of the commonly used media of the time. Early Linux distributions came on multiple "floppy" disks! The first convenient common media was the CD-R with a capacity of about 650MB. Oracle Linux 3, 4, and early versions of 5 were distributed with multi-volume CDROM images. Eventually, dealing with multiple CDROM images became unwieldy and the DVD image became very common. The first DVD writable DVD drives and media were Single Layer with a capacity of about 4.7GB

Below is a chart that shows how the x86_64 version of the ISO image has grown over the years:

It's been a struggle to keep the Oracle Linux 7 images within the 4.7GB boundaries of a single layer DVD image. While dual layer drives are now commonplace, the availability of dual layer media (and it's cost) kept it from becoming mainstream. With Oracle Linux 8 - it's grown so large that efforts to contain it have been largely abandoned.

Large ISO images are not a problem for installing Oracle Linux in VirtualBox; just mount up the ISO image and go. But there are still folks that want to install Oracle Linux on "real" hardware - an older server, laptop, or desktop machine. Many newer machines do not have an optical drive.

Over time I have noticed a growing trend of folks experiencing difficulties with installing recent versions of Oracle Linux on "real" hardware. Some were downloading the wrong ISO image. Others had corrupted downloads or were attempting to burn a large ISO (Oracle Linux 8) on single layer DVD-ROM.

That's the purpose of this article - a one-stop place to learn how to create a bootable USB memory stick to be used as the Oracle Linux installation media for "real" hardware.

This article will show:

I realize that not everyone has access to an Oracle Linux machine to do this... So instructions for Windows, Mac, and Linux users will be shown!

Note that using Oracle Linux to create the USB Installation Media is the only method supported by Oracle. The suggested use of third party tools (such as balenaEtcher or Rufus) are provided here as a convenience. Support of these utilities are not covered by Oracle.

An easy place to download the Oracle Linux ISOs is the Oracle Yum Server - no login required:

The "Boot ISO" image listed looks very enticing as it is  considerably smaller than the others. However, this image is only used for network installations; it is NOT a full installation image of Oracle Linux! For more information on using the Boot ISO and the network installation server required for its use, see this link to the Oracle Installation Guide for Release 8 https://docs.oracle.com/cd/F12552_01/F13930/html/netinst-req.html
We post the Source ISOs because Oracle Linux is released as Open Source Software, so we must post the source code. Unless you are rebuilding Oracle Linux from source code - you will not need that ISO.
In most cases you only need to download the "Full ISO" image.

Another very important task is to verify the downloaded image! Even with high speed broadband, anything can happen en route. So ALWAYS check the hash of these large ISO files.

See this link for instructions to verify the ISO download: https://linux.oracle.comsecurity/gpg/

There are many Windows based file hashing utilities available. Some are "free", others require a paid license.

7-Zip is an open source based free utility; recent versions include a nice addition to the Windows Context menu that includes a SHA hashing tool.

To run the hash on your ISO from Windows with 7-Zip, RIGHT CLICK on the ISO you wish to hash. The Windows context menu will appear, LEFT click the CRC SHA menu item then LEFT click the SHA-256 menu item (screenshot below): 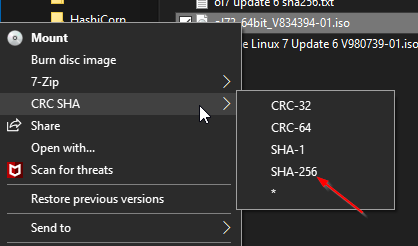 A window will appear and show the progression: 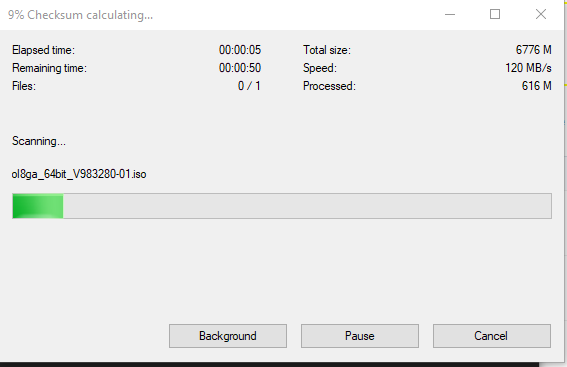 When completed the hash will appear in another window: 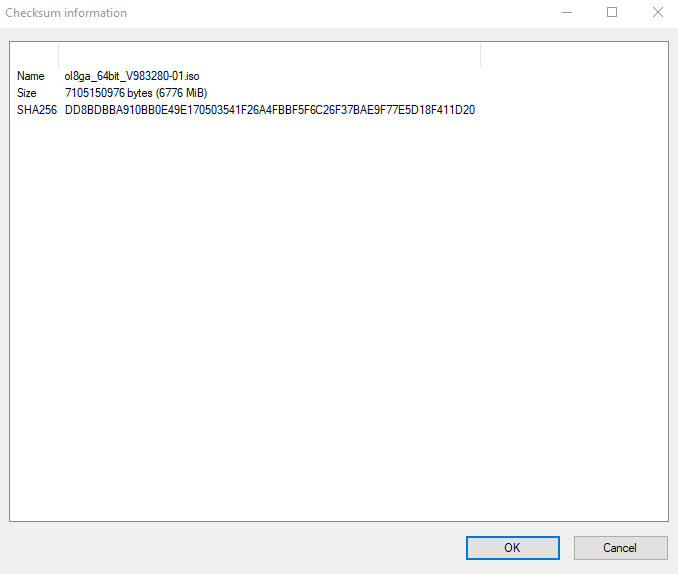 Now compare the computed hash to the one from Oracle Software Delivery Cloud Digest to make sure they are identical:

If they match, your Oracle Linux ISO is good to go.

If they don't, double check to make sure you ran the hash on the correct ISO file, and that you used SHA-256.

If the hash still compares wrong, most likely your download was corrupted. Delete that ISO and download it again.

Here are some suggestions to try if you get corrupted downloads:

The Mac has a native command line hashing tool.

Open Terminal - you can search for it in Spotlight or Launchpad (or ask Siri if you are lazy)... Or open it directly in Applications > Utilities.

Once open, enter the command "shasum -a 256 " followed by the path to the ISO you want to hash, OR drag and drop the file onto Terminal's window to automatically past the full path to it. Example:

After the hash is calculated it will be displayed on the next line in Terminal. Example:

Then compare the hash generated to the one from the Digest on Oracle Software Delivery Cloud.

The largest image to date (Oracle Linux 8) is 9.9GB, so a 16GB USB memory stick is recommended.

"Know your hardware!" Newer machines will have USB 3.0 ports. SOME machines will identify USB 3.x ports with a blue, green, or red tab in the port, but you can't rely on that. So check the hardware specs of the machine(s) involved.

Of course if your machine has both USB 2 and USB 3 ports, use a USB 3 memory stick in a USB 3 port for best (and fastest) results!

For maximum portability and compatibility, use FAT32. Check the drive before attempting the "build" process.

Format the drive if you need to change file systems or clean up the drive before reuse.

There are a number of flash writing utilities available for Windows, including Rawrite32, Rufus, and others.

Rufus is a free and open source utility for Windows 7 and later (released under GPLv3). It has been around for a while and is quite popular.

A newer utility - and the one that I will document here - is balenaEtcher (sometimes just called Etcher.) It is a free and open-source utility., released under Apache Version 2.0.  Features:

Insert the USB memory stick into the USB port, and launch balenaEtcher: 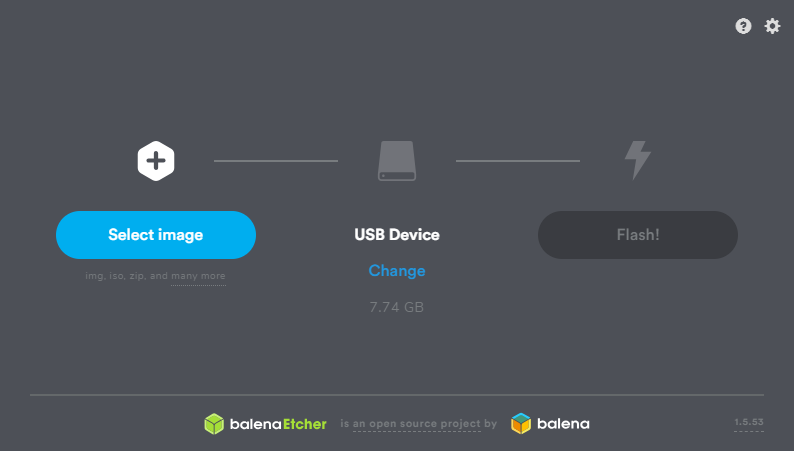 Click the Select image button; a window will appear. Navigate to the ISO file that you want to use, then click Open 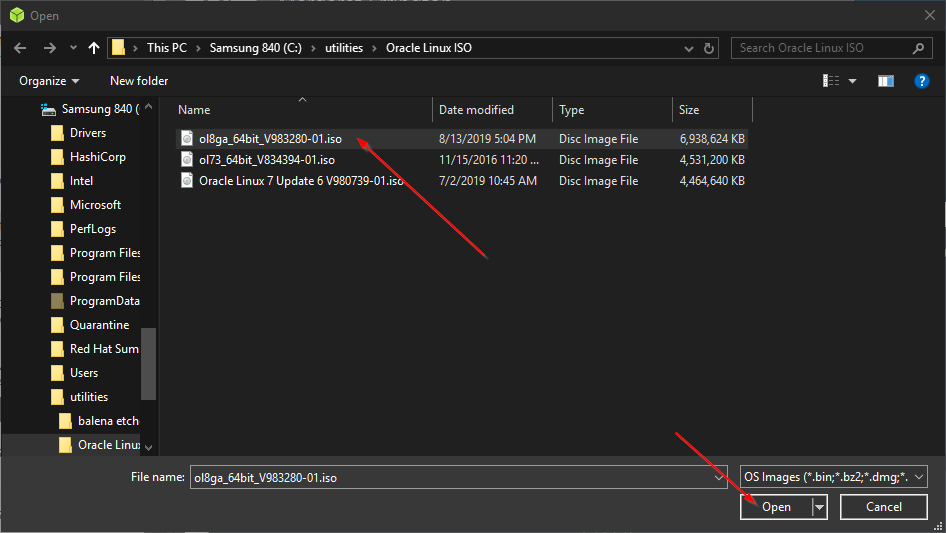 balenaEtcher does a very good job assuming the USB Device, it should be already selected for you. If it is wrong, click "Change" and select the correct device. Notice in my example the empty, FAT32 formatted USB memory stick shows a capacity of 7.74GB - about right for an 8GB device. 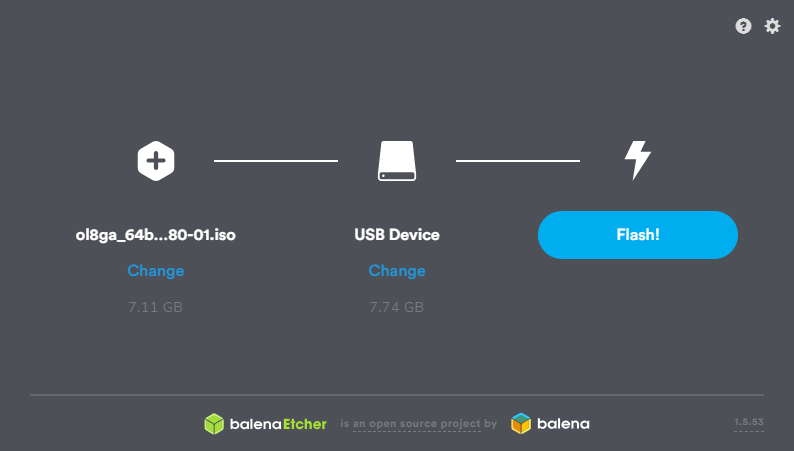 You may get an approval request from Windows to proceed, if so click OK. As balenaEtcher is working, you will see a progress bar with an estimated ETA: 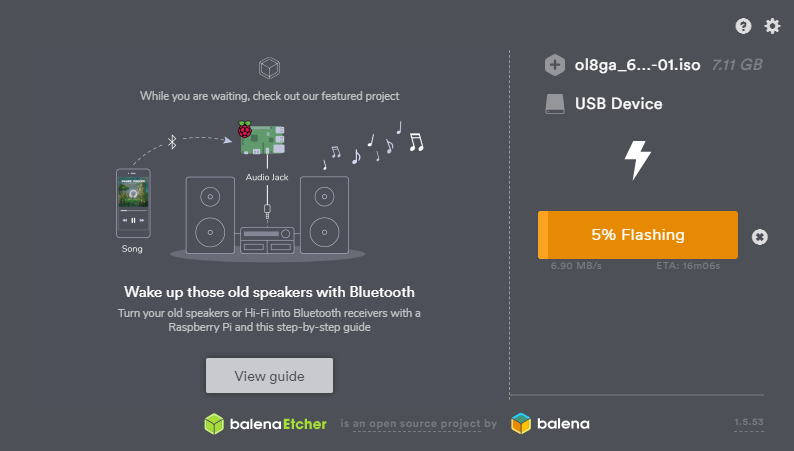 After the Flashing phase, balenaEtcher will Validate the flashed image: 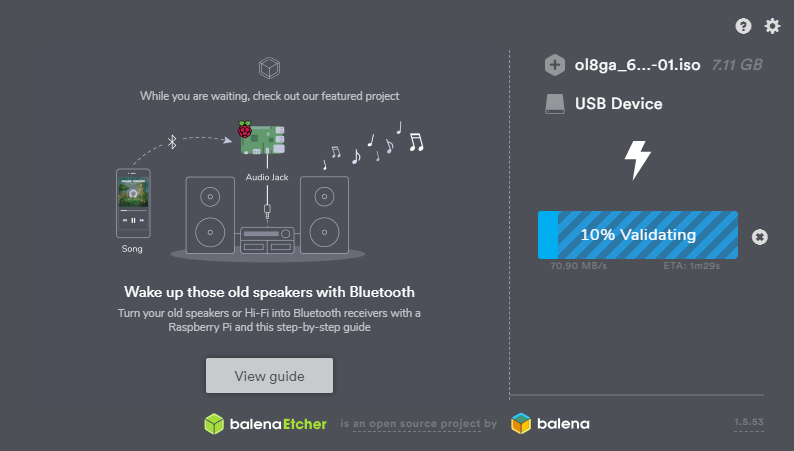 If the Validation check is OK, balenaEtcher will automatically unmount the USB Memory stick and show this result: 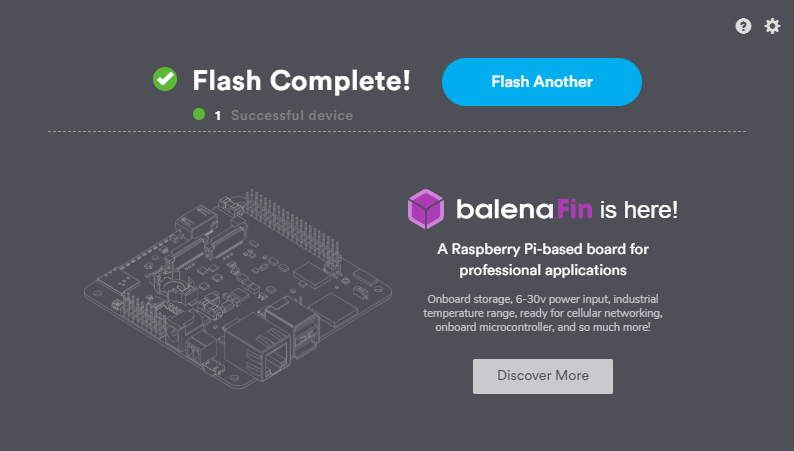 balenaEtcher is available for the Mac, and the user interface is identical to Windows.

Use the procedure and the screenshots for using balenaEtcher on Windows above as the guide for proceeding on a Mac.

If you have Oracle Linux with a GUI, you can install balenaEtcher on Oracle Linux. It is distributed in AppImage format (not an RPM). For more info on AppImage, visit https://appimage.org/

AppImage will require Oracle Linux to have FUSE installed.

balenaEtcher on Oracle Linux GUI will look identical to the Windows screenshots above, so use those instructions as a guide.

Use a command line interface on Oracle Linux machines that do not have a GUI. Instructions for writing the image are listed in the Oracle Linux Installation Guides for each version of Oracle Linux. As an example, here is the link using Oracle Linux 7 to prepare the USB Installation Media: https://docs.oracle.com/cd/E52668_01/E54695/html/ol7-install-media-usb.html

You should now be well-prepared to create USB Installation Media for Oracle Linux. I suggest you "burn" the latest version of Oracle Linux 7 and Oracle Linux 8 to a couple of inexpensive 8GB or 16GB USB sticks and toss them in your computer bag, just in case you suddenly get the urge to install Oracle Linux on "real" hardware!