by Randal Sagrillo and Larry McIntosh

This article provides a real-world example of migrating an Oracle Database instance from IBM AIX to Oracle Solaris, highlighting the steps, effort, and benefits as well as demonstrating the simplicity and ease of the process.

Oracle Solaris and Oracle's SPARC servers are key components of Oracle's integrated hardware and software stack that create enormous value for customers. Moreover, for customers who are overdue for an upgrade of their AIX/Power systems that are running Oracle Database and/or other Oracle applications, the opportunity for improvement by migrating to Oracle Solaris is even greater.

The first article in this three-part series, "Architecture Matters, Part 1: Assessing Application Migration Impact," gave four simple steps customers can take to migrate from AIX to Oracle Solaris quickly and efficiently. Now, this second article details a real-world example of migrating an Oracle Database instance from IBM AIX to Oracle Solaris, highlighting the steps, effort, and benefits. It also demonstrates the simplicity and ease of operation built into Oracle Database.

All the articles in this "Architecture Matters" series are located here:

The following is a real-world example that highlights what it takes to migrate Oracle Database 11g Release 2 from an IBM Power system that runs AIX to a SPARC system from Oracle that runs Oracle Solaris. Data Pump, an important tool that is part of the Oracle Database software, is used.

The configuration, as tested, is shown in Figure 1.

While multiple databases were created and migrated as part of these tests, in this article, we show the results and steps for migrating a single 100+ GB database.

To facilitate reproducible results, the Swingbench 2.5 database benchmarking tool was used to build a 100+ GB order-entry database that was tested with a 1,000-user order-entry OLTP workload created by Swingbench. To see how Swingbench has been used on AIX systems, refer to this IBM document.

The Oracle Database 11g Release 2 instance was installed on a bare-metal AIX Power server with access to all the cores and memory of the IBM Power 740 system. Installation followed the prerequisites and standard practices outlined in the Oracle Database installation documentation for AIX. Swingbench's order-entry installation wizard was used to create the 100+ GB order-entry schema. Figure 2 shows the completed creation of the order-entry database on the AIX system. Note the total run time for this schema creation process was 86 minutes and 32 seconds. 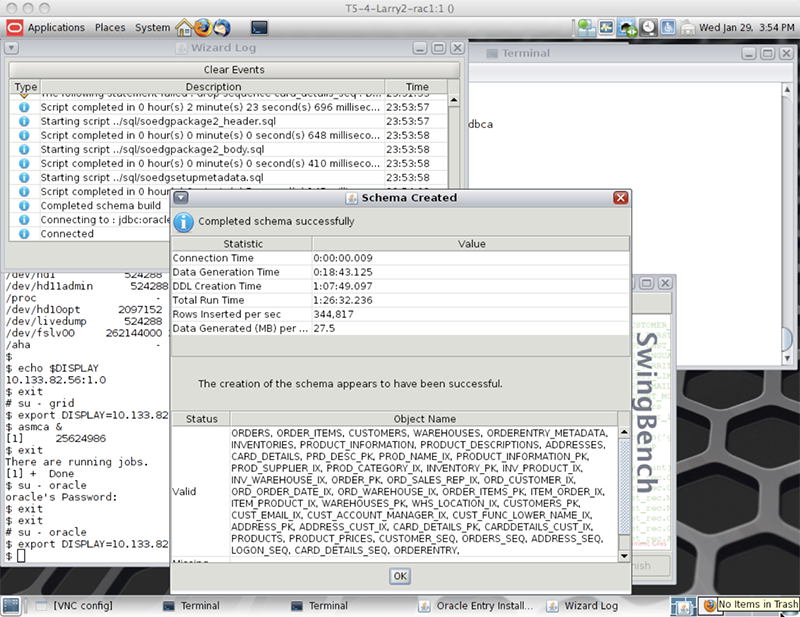 The final step before exporting the database to the Oracle Solaris system using Data Pump was to validate the database on AIX using Swingbench's order-entry benchmark. The successful test results are shown in Figure 3 for a 1,000-user run. 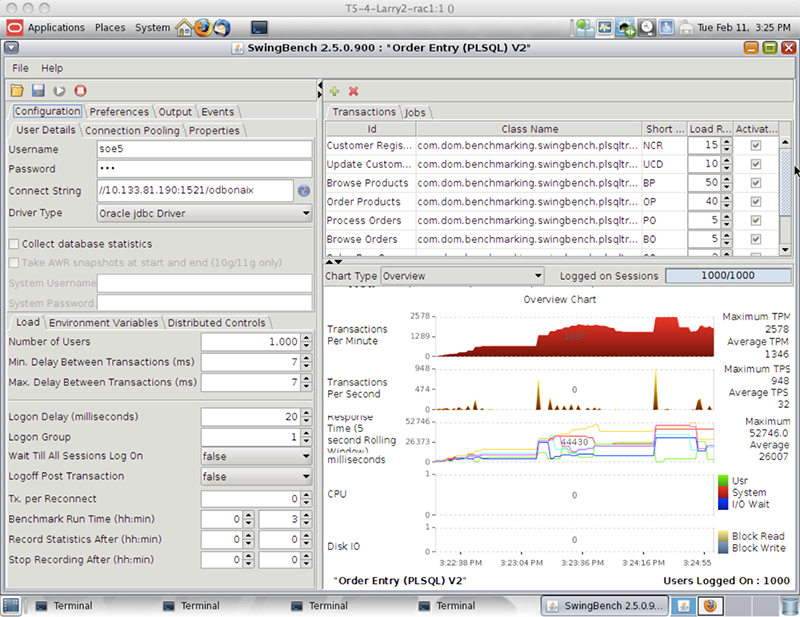 Oracle Database's Data Pump feature provides a fast and simple way to move databases between systems. In this case, all aspects of the database were migrated between heterogeneous operating systems, each running Oracle Database 11g Release 2. The "full" option was used to export and import not only the actual relational data, but also all the metadata, including database profiles, stored procedures, links, synonyms, roles, rollback segment definitions, system audit options, system privileges, tablespace definitions and quotas, and user definitions, as well as all database user schemas and database objects in the user schemas.

Because the source database to be migrated from AIX had been functionally validated using the order-entry benchmark in Swingbench, the database could be prepared for export. The following steps were used to accomplish this.

First, the SID (odbonaix) was verified to be correct:

Then the database on the AIX system was connected to:

A directory was created into which the data files would be exported:

A user was created (in this case, soe5) with privileges on the database:

The expdp command was used to export the database from AIX:

The full=Y option indicates that a complete database export was requested. directory indicates the directory where the database files to be exported were located. dumpfile indicates the names of the data files that were exported from AIX, and these names were used for the import into Oracle Solaris. Due to the parallel=4 option, Data Pump used four different threads to speed up the export operation. The logfile parameter specified where a log of the execution of this command would be written. Note that no compression or encryption options were used with this baseline export test.

After the export operation, the following files appeared within the dump directory:

First, the SID on the Oracle Solaris system was verified to be correct:

Then the database on the Oracle Solaris system was connected to:

A directory into which to export the data files was created:

A user (in this case, soe5) was created with privileges on the database:

The following command was run to ensure that Swingbench ran:

SQL> grant execute on sys.rdms_lock to soe5 with grant option;

scp was used to copy the files from the AIX server to the Oracle Solaris server, validating that all the files were the right size and were placed in the location defined above: /downloads/datafiles/aix.

Note: Other copy methods, such as ftp, can also be used to copy over the files.

Then the impdp command was used to import the database into Oracle Solaris:

The parameters used were nearly identical to those used for the export from AIX. The import of the complete 100+ GB database took 36 minutes and 22 seconds, again with no compression or encryption.

After the migration was complete, the database was brought online. The database was queried directly to check the number of rows, and so on, to make sure the database appeared to be intact. Furthermore, database content was compared to the content of the original database to ensure the integrity of the data.

Figure 4 shows the 1,000-user validation run with the 100+ GB database migrated from AIX onto Oracle Solaris and the SPARC T5-2 server: In this case, it appears that it was faster to do the export and import than to create the database using a sophisticated benchmark tool such as Swingbench's order-entry installation wizard. Results will vary with each situation, but what is evident is the ease, speed, and simplicity of migrating a running Oracle Database database from AIX to Oracle Solaris. This same procedure can be used to upgrade a database from Oracle Database 11g Release 2 to Oracle Database 12c just as simply.

It is worth noting that Oracle engineers also tested importing a database into a virtualized instance consisting of a single SPARC T5 socket using Oracle VM Server for SPARC (also called logical domains or LDoms). The configuration consisted of a SPARC T5-4 server from Oracle running a consolidated workload with Oracle Database 11g Release 2 on a single LDom and Oracle Database 12c on a another LDom, as shown in Figure 5. Detailed information about the use of Oracle VM Server for SPARC can be found at oracle.com/us/technologies/virtualization/oracle-vm-server-for-sparc/overview/index.html.

The engineers who migrated the database from AIX onto the SPARC T5-4 system shown in Figure 5 also tested the upgrade path to Oracle Database 12c using the database migrated from AIX to the SPARC T5-4 system as the source of the input for the upgrade to Oracle Database 12c, which worked just as smoothly. So, a very nice side benefit of database migration is that it provides a good time to do a database software upgrade as well.

As discussed in the first article in this series, with the proper planning and assessment, customers can migrate with ease and confidence. And by using training resources available from Oracle University and by applying Oracle Optimized Solutions as an end-state architecture, customers have all the tools necessary to migrate and also upgrade their databases. Moreover, customers who elect not to perform a migration themselves have access to Oracle Migration Factory experts who can assist with their deep experience, tools, and methods.

To find out more about how to begin migration and receive the benefits of Oracle hardware and software engineered to work together, see oracle.com/aixtosolaris.

Randal Sagrillo is a solutions architect for Oracle. He has over 35 years of IT experience and is an expert in storage and systems performance, most recently applying this expertise to next-generation data center architectures, integrated systems, and Oracle engineered systems. Randal is also a frequent and well-attended speaker on database platform performance analysis and tuning and has spoken at several industry conferences including Oracle OpenWorld, Collaborate, Computer Measurements Group, and Storage Networking World. In his current role, he is responsible for solution architecture and development around Oracle Optimized Solutions. Before joining Oracle, Randal held a variety of leadership roles in product management, program management, and hardware/software product development engineering.

Lawrence McIntosh is the chief architect within the Oracle Optimized Solutions team. He has designed and implemented highly optimized computing, networking, and storage technologies for both Sun Microsystems and Oracle. Lawrence has over 40 years of experience in the computer, network, and storage industries and has been a software developer and consultant in the commercial, government, education, and research sectors and an information systems professor. He has directly contributed to the product development phases of Oracle Exadata Database Machine and various Oracle Optimized Solution architectures. His most recent contribution has been in the design, development, testing, and deployment of Oracle Optimized Solution for Secure Oracle Database.