by David Saes and Michelle Szucs

Oracle software runs on a wide variety of hardware platforms, including many non-Oracle stacks. However, Oracle's full-stack engineering has resulted in an ever-widening gap between the benefits of running a full Oracle stack and the difficulty of optimizing a mismatched stack. Collaboration among Oracle's application, middleware, database, operating system, server, storage, and networking teams has led to innovations in security, performance, simplicity, and cloud-readiness for Oracle solutions.

Figure 1 illustrates the overarching architecture used for the lift-and-shift migration process. Users access Oracle WebLogic Server, which is configured with the Oracle WebLogic Cluster feature, via a load balancer. Any load balancer can be used, including Oracle Traffic Director (which comes with some of the options available for Oracle WebLogic Server, Enterprise Edition), Apache HTTP Server, Oracle HTTP Server, or F5 Big-IP. The application(s) running on x86 Linux machines in the source architecture will be moved to new SPARC servers running Oracle Solaris in the target architecture. 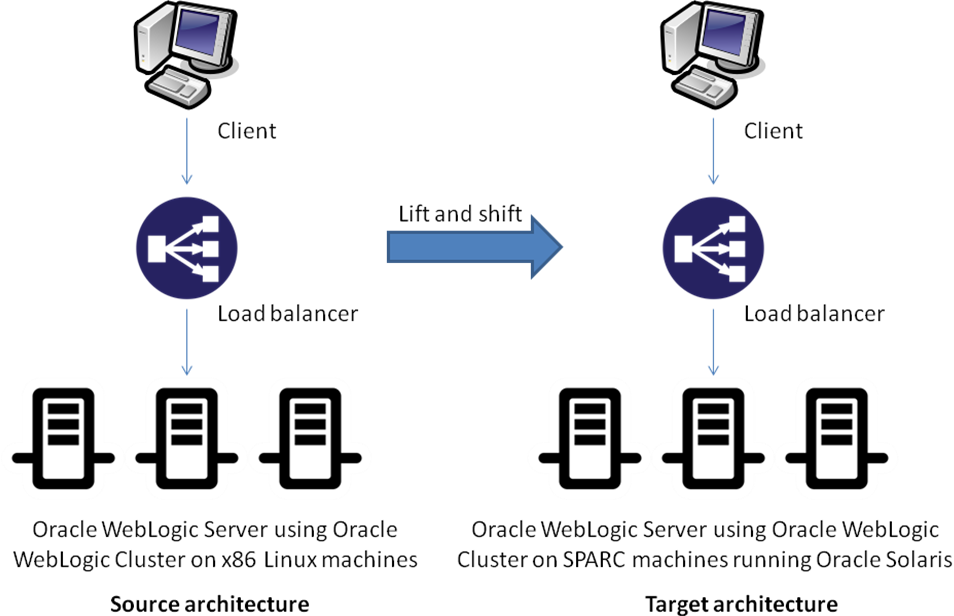 Virtualization of the source and target architecture should not impact the migration process. For instance, existing virtual machines can be migrated into Oracle VM Server for SPARC (also called Logical Domains or LDoms), Oracle Solaris Zones, or Oracle Solaris Kernel Zones without changes to the process. Therefore, this article details only the steps of the Oracle WebLogic Server migration, allowing flexibility for any virutalization requirements.

The configuration of the demonstration environment we used for this article is depicted in Figure 2. One x86 server running Linux was configured with the host name weblogic-linux. One SPARC server running Oracle Solaris was configured with the host name weblogic-solaris. The name of the Oracle WebLogic Server administration domain was wls_domain. This domain contained an administration server called AdminServer and a cluster called cluster1. cluster1 contained one managed server called wls_server1, in which a simple servlet application called HelloWorld was deployed. 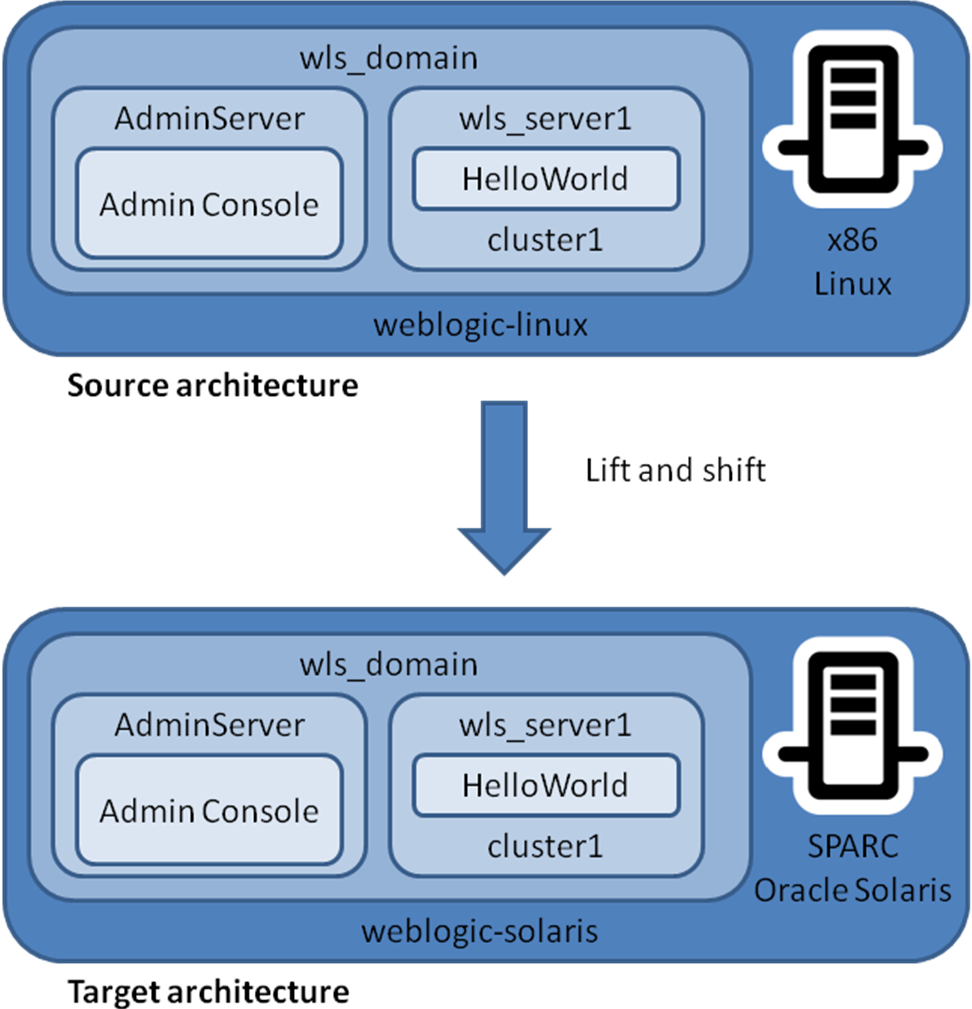 Figure 2. Configuration of the demonstration environment

In this article, the domain directory (the Domain home) is referred to as DOMAIN_HOME. In the demonstration environment, this directory is /u01/oracle/domains/wls_domain. 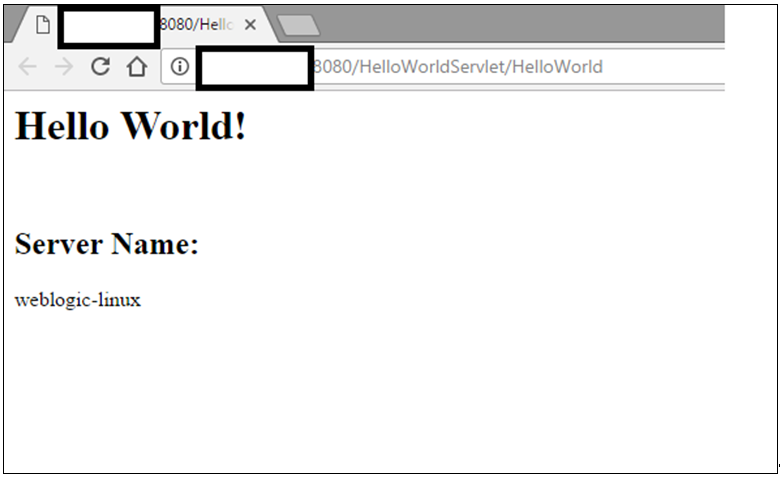 Complete the following steps to obtain the domain template:

1. To export the domain from the server running Linux, first connect to the weblogic-linux server.

2. Navigate to the directory MW_HOME/oracle_common/common/bin.

3. Execute the config_builder.sh script, which should produce the screen displayed in Figure 4. 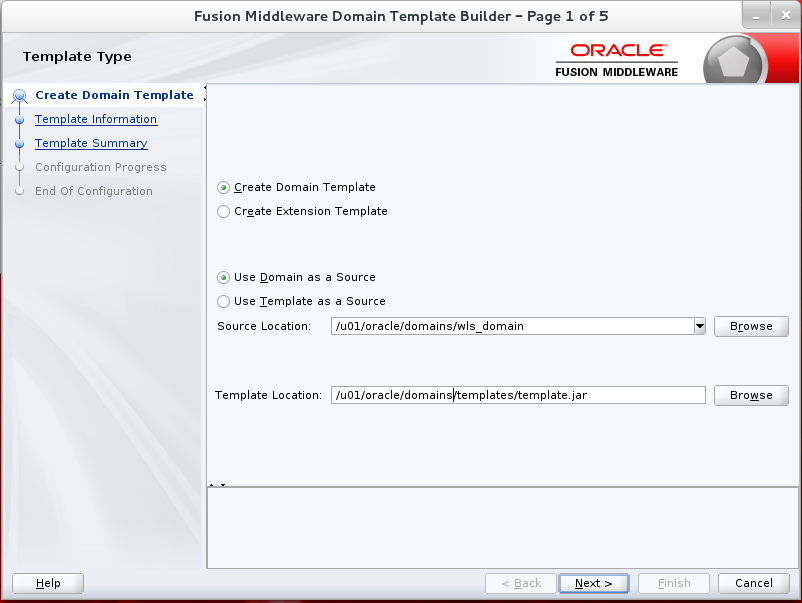 4. Select Create Domain Template and Use Domain as a Source.

5. In the Source Location field, ensure DOMAIN_HOME directory is selected.

6. In the Template Location field, enter the path and filename of the JAR file that will be created to store the domain configuration.

7. Provide a name or description to the template, if desired.

8. The last screen of the template creation process is shown in Figure 5. This view allows you to review the managed servers, clusters, and applications that are being included in the template. After reviewing the contents of the template, click Create. 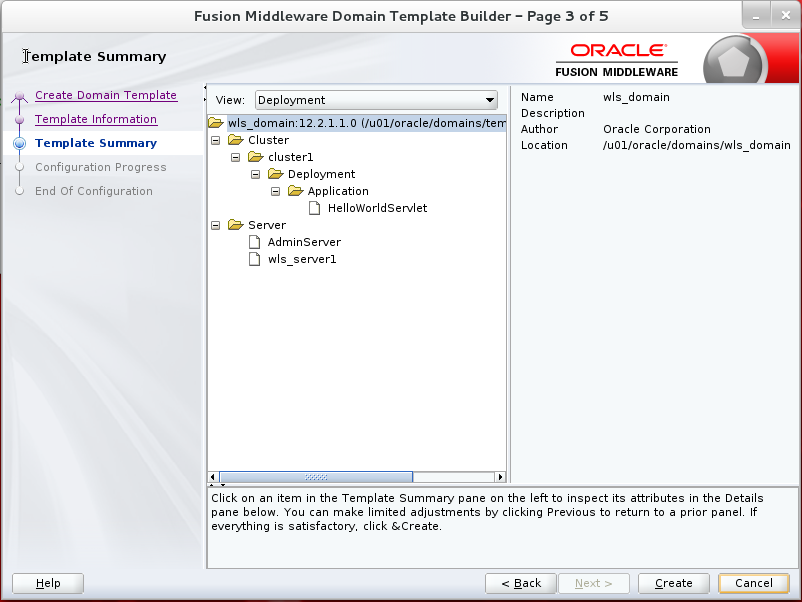 9. After the process finishes, click Next, and then click Finish on the final summary screen to exit the template builder tool.

Copy the Domain Template to the SPARC Server

Transfer the domain template JAR file that was created from the Linux server to the SPARC server that is running Oracle Solaris. The following command shows using scp from the weblogic-linux session to perform the transfer:

Import the Domain Template into the Oracle Solaris Environment

4. Execute the config.sh script, which should produce the screen shown in Figure 6. 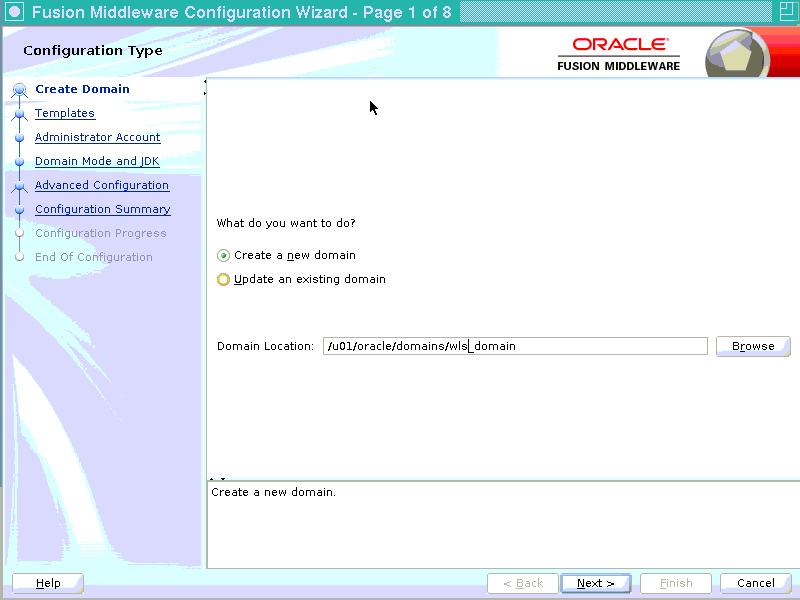 6. In the Domain Location field, enter the path to where you would like the domain installed. If possible, use the same path as was used on the Linux installation.

7. On page 2 of the wizard (shown in Figure 7), select Create Domain Using Custom Template, and then in the Template location field, select the location of the JAR file copied over from the Linux machine. 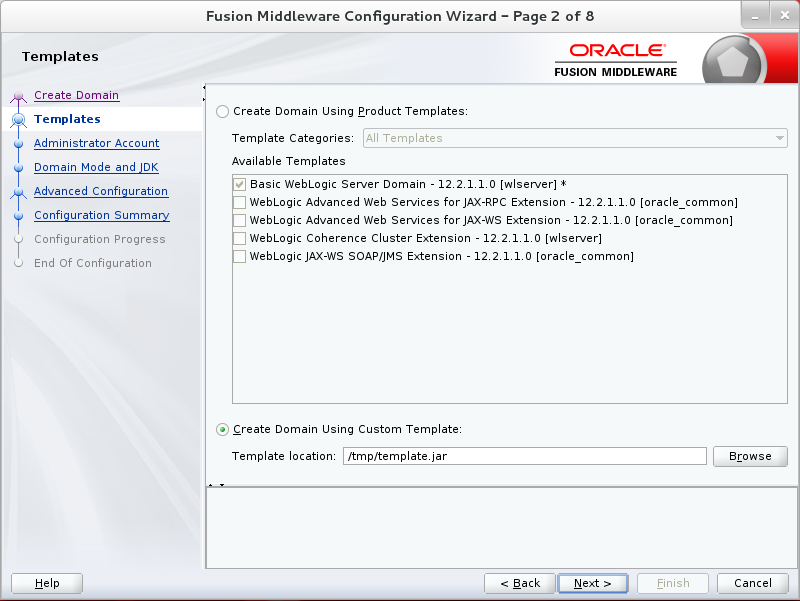 8. On page 3 of the wizard (shown in Figure 8), in the Application location field, select the DOMAIN_HOME directory. 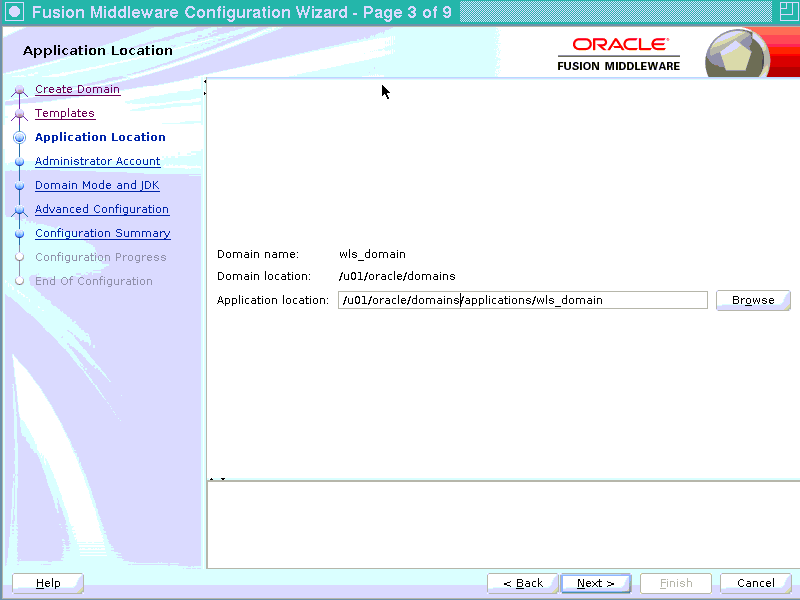 9. On page 4 of the wizard (shown in Figure 9), enter the domain credentials for the administrator account. 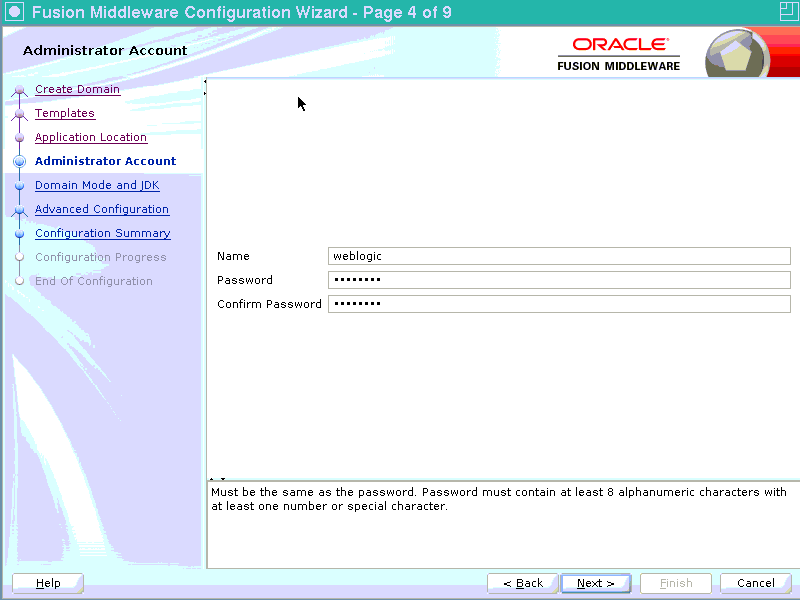 10. On page 5 of the wizard (shown in Figure 10), select either Development or Production for the domain mode, depending on what is appropriate for the application you are migrating. The correct JDK path should already be selected if you maintained the same JDK version as was used in the Linux environment. 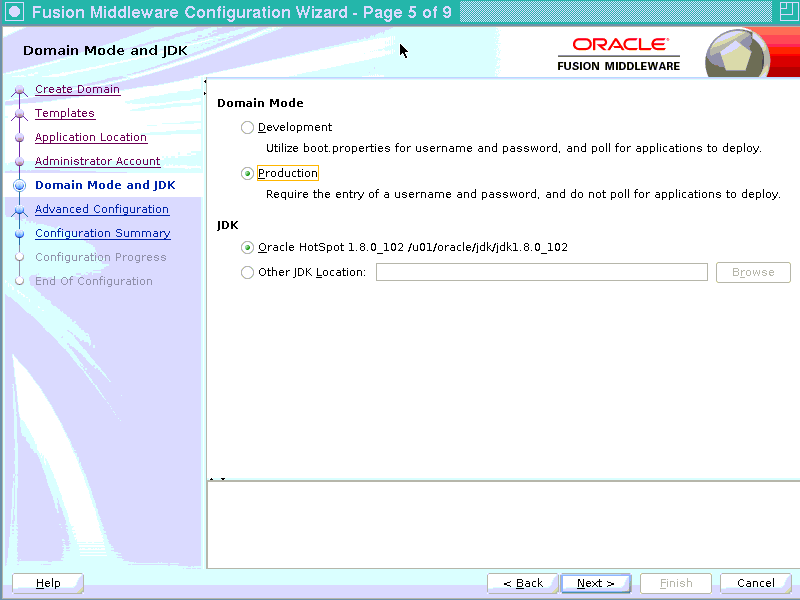 11. On page 6 of the wizard (the Advanced Configuration screen), we selected the checkboxes for all the options. Selecting these options ensures that any values that default to the old Linux environment can be updated to reflect the new Oracle Solaris environment.

12. On page 7 of the wizard, configure the administration server; the demonstration configuration we used is shown in Figure 11. Ensure that the Listen Port field points to the desired port on the new Oracle Solaris environment, not to the old Linux environment.

Note: In this simple demonstration environment, we did not enable SSL for either the source or target environment; carefully consider the security ramifications before reaching a final decision regarding the use of SSL. 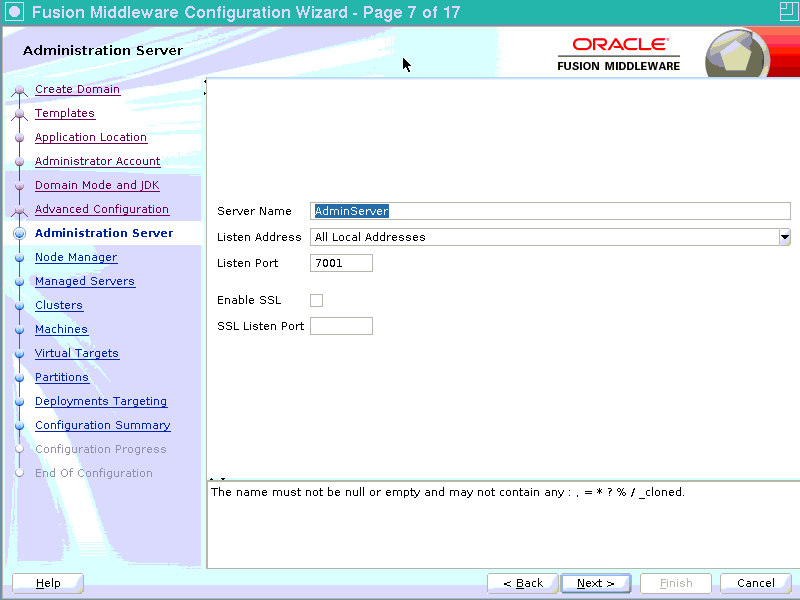 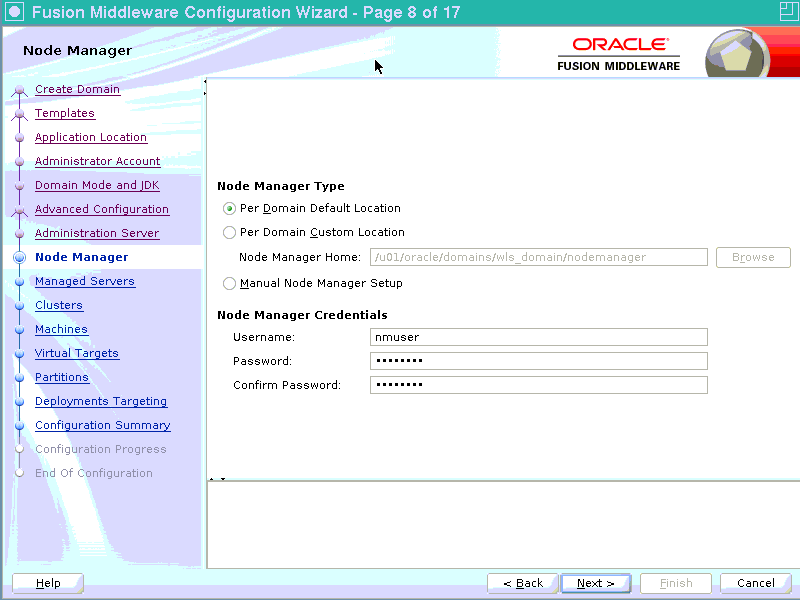 14. On page 8 of the wizard (shown in Figure 13), configure the managed server. As when configuring the administration server, ensure the port is set appropriately for the Oracle Solaris environment instead of defaulting to the Linux configuration. Again, we did not use SSL in this simplified demonstration environment, but your environment will likely have different security requirements. 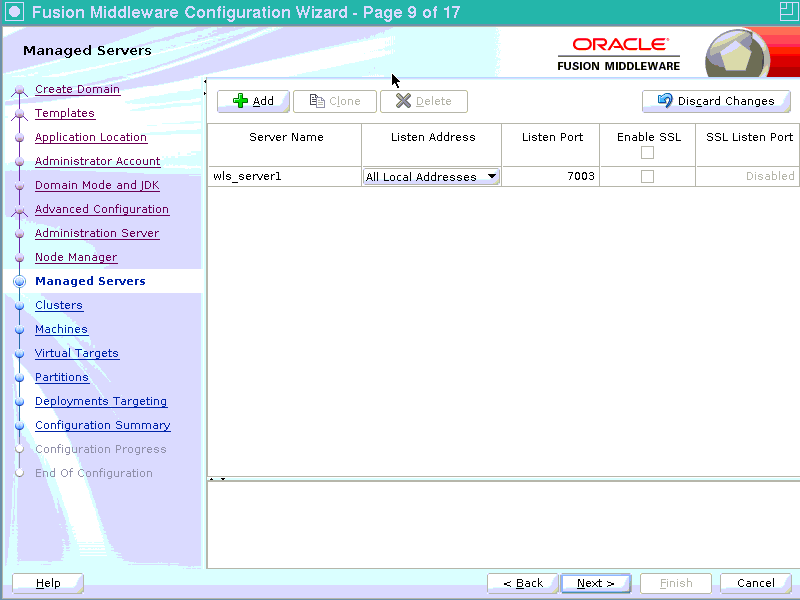 15. Configure the cluster properties, as shown in Figure 14, ensuring the Cluster Address field is set correctly for the Oracle Solaris environment. 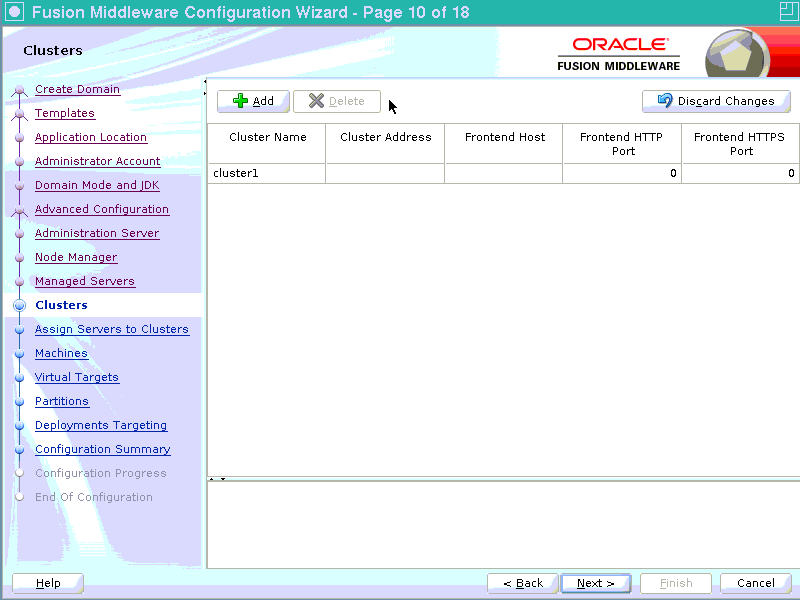 16. Assign servers to the appropriate clusters, as shown in Figure 15. 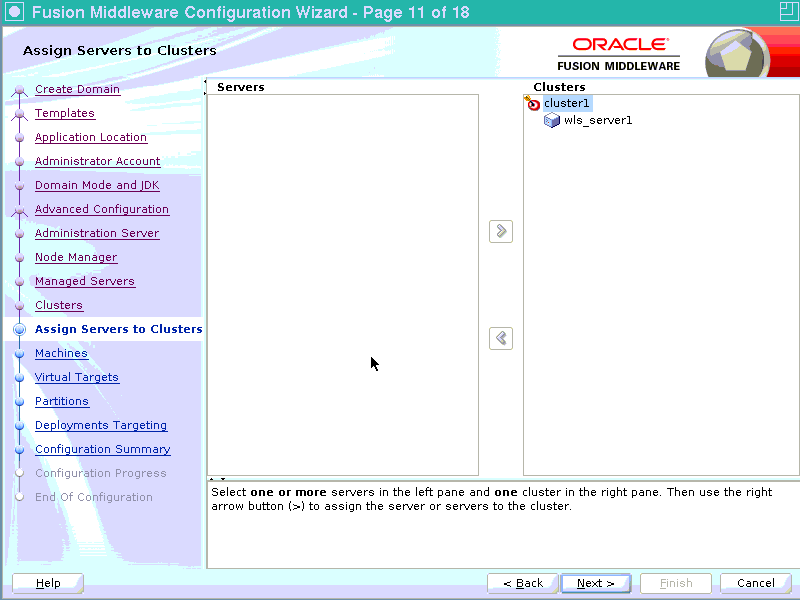 17. The machine configuration is shown in Figure 16. Configure the Name and Node Manager Listen Address fields for the local Oracle Solaris machine, not for the settings of the Linux server. 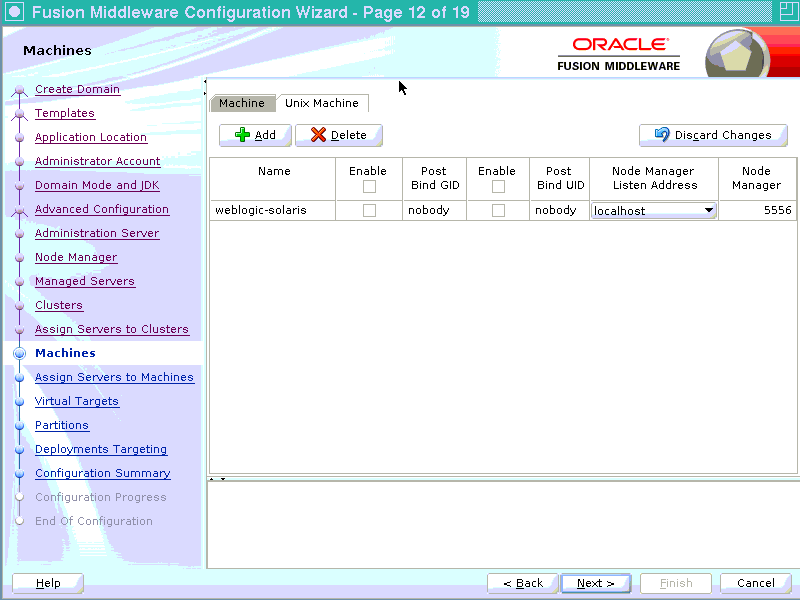 18. Ensure the assignment of servers to machines is correct, as displayed in Figure 17. 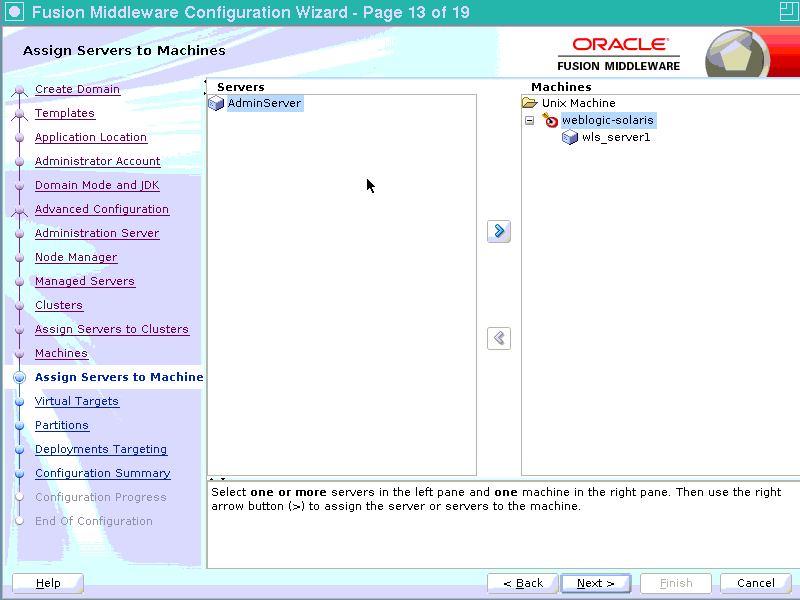 19. The configuration we used did not require virtual targets or partitions, so we clicked Next without making changes on the Virtual Targets or the Partitions screens.

20. On the Deployments Targeting screen shown in Figure 18, ensure that the targets are correctly configured. 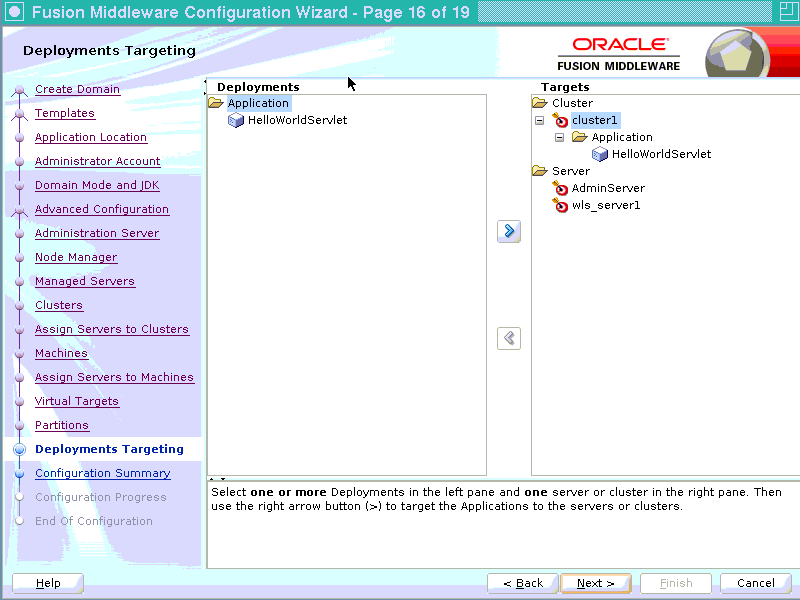 21. Review the Configuration Summary screen shown in Figure 19. When you are satisfied that the environment is configured correctly, click Create. After the creation process completes, click Next and then Finish to exit the wizard. 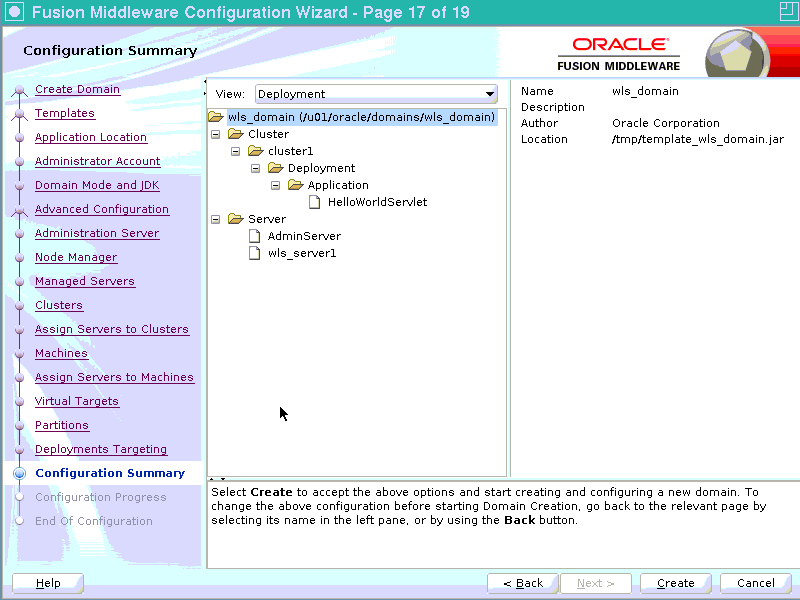 After the domain has been created on the Oracle Solaris machine, start the administration server, node manager, and managed server as you usually did on the Linux machine, via scripts or the Oracle WebLogic Server Administration Console.

Configure your load balancer to point to the Oracle Solaris installation, and try to access the application. The result should be the same as was previously seen in the Linux installation; Figure 20 shows the simple HelloWorld servlet successfully running in Oracle Solaris. 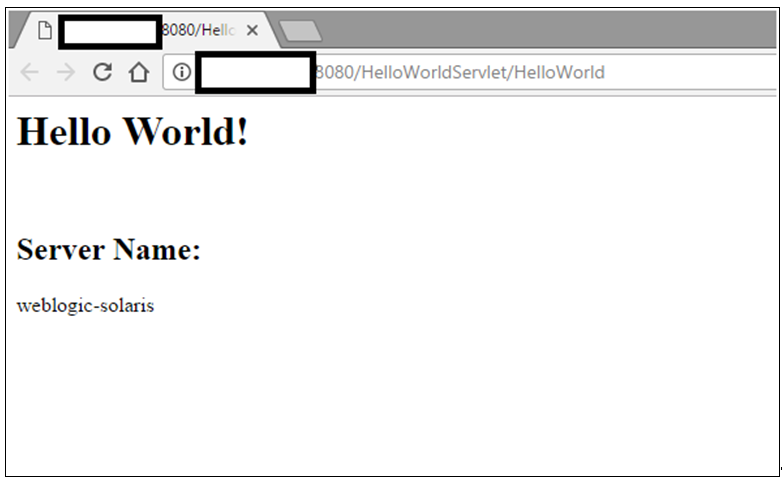 David Saes is a solution architect in the Systems division of Oracle. He specializes in Oracle's middleware products, and has served as a middleware consultant for more than seven years.