Oracle offers a complete technology stack composed of hardware and software. Tightly integrated, the multiple layers of the stack contain tools for data protection and backup and recovery. Important tools can be found at the application, database, operating system, virtualization, and storage levels, as shown in Figure 1. Following best practices and combining these tools effectively can result in an optimal solution for backing up Oracle systems. In fact, by not relying on any single tool, it is possible to create an ideal data protection environment that reduces reliance on conventional backups. 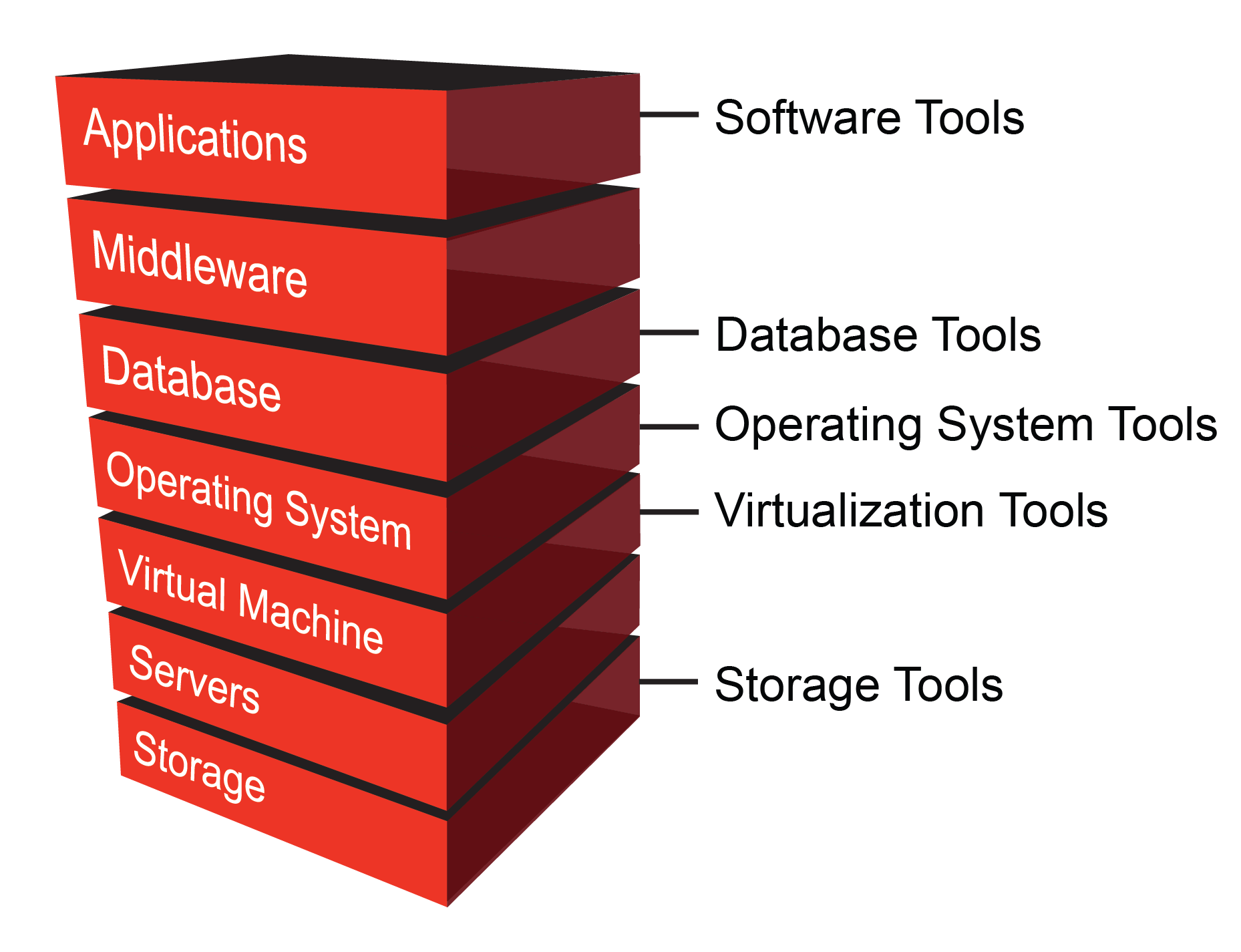 Among the tools from each layer are the following:

Using a Combination of Software Tools

The tools within the different layers of Oracle's stack can be used to help achieve diverse—and precise—recovery time and recovery point objectives. By using various tools listed below, it is possible to protect valuable enterprise data and production environments without relying on conventional—and lengthier—backup and restore operations.

When performing backup and recovery in virtualized environments or in environments with unstructured (nondatabase) data, traditional approaches consist of taking disks and applications offline and writing from disk to tape. In the real world, however, organizations require 24/7 availability and cannot afford to take applications offline at all. Oracle Solaris 11 uses Oracle Solaris ZFS (ZFS) as the default file system and ZFS provides features for capturing a system snapshot that can be sent to an external Oracle ZFS Storage Appliance system or stored on tape.

Oracle Optimized Solution for Secure Backup and Recovery is configured with an internal Oracle ZFS Storage Appliance system that can store the virtualized environments and file system snapshots. Oracle recommends the use of these snapshots to maintain application availability while obtaining a copy of vital data.

NDMP is an open-standard protocol for network-based backup of network-attached storage (NAS) devices. It facilitates interoperation of backup software and NAS hardware. Because NAS devices are not intended to host applications such as backup software agents and clients, they cannot be set up as backup clients for software such as Oracle Secure Backup. Instead, an NDMP service is created on the NAS device, using NDMP host types to designate an Oracle ZFS Storage Appliance system as the backup target. These host types require the use of specific path names. Please refer to My Oracle Support Note 1558851.1 for examples.

Best Practices for a Secure Backup and Recovery Implementation

STIGs are continually updated and currently available for many Oracle products. Here is a list of STIGs relevant to this solution:

And here is the full list of relevant component security recommendations:

Best Practices for Backup and Recovery of Operating Systems

Operating system backups are critical and should be made before and after every significant change to the Oracle SuperCluster software. This includes performing backups before and after completing the following procedures:

The conventional method for backing up an operating system is to install backup and recovery software and perform backups of the operating system to disk or tape, potentially an inefficient approach in 24/7 environments. In Oracle Solaris 10 and Oracle Solaris 11, the ZFS file system enables bare-metal recovery of the operating system using ZFS snapshots, the ZFS commands zfs send and zfs receive, and ZFS stream files. A ZFS stream file is an image of an entire ZFS file system placed into a file on an NFS share. The zfs send command creates a stream representation of a ZFS snapshot that is written either to a file or to a different system using standard output. The zfs receive command creates a snapshot whose contents are specified in the stream that is provided on standard input. If a full stream is received, a new file system is created as well. This functionality enables administrators to send and receive ZFS snapshot data and file systems using these commands.

Here is a high-level outline of the steps used to perform a backup and bare-metal recovery of the operating system. For details and commands, please see the Oracle SuperCluster Administrator's Guide, or My Oracle Support Note 1558851.1.

To perform a backup, do the following:

To perform a restore of the snapshot, boot from the Oracle Solaris boot media, as follows:

This procedure restores the zfs send file from the ZFS stream file back to the new ZFS pool. Using zfs send and zfs receive is the preferred method for restoring a bare-metal operating system. The previously recommended method—using a deployment system—takes approximately eight hours contrasted with 45 minutes when using the ZFS stream file method.

The physical resources within Oracle servers can be virtualized for greater agility and utilization. Two different methods can be used for virtualization. The first method creates domains, partitioning the hardware to use specified physical resources and then physically or logically isolating one domain from another. The second virtualization method uses Oracle Solaris Zones, where each zone is a virtualized operating system environment created within a single instance of Oracle Solaris. Implementing zones enables the installation of multiple versions of Oracle Solaris 10 and Oracle Solaris 11 on a single system.

When backing up domains, the backup methods are the same as for the operating system. The restoration procedures vary, depending on what devices are installed with the domains, what disks are designated as targets, and where the rpool is created to receive the restore.

Domains also can be backed up with block-level backups using NDMP and an Oracle ZFS Storage Appliance system. Note, however, that this method is limited to backing up entire data sets, and does not offer the ability to restore single files. Single-file backup and recovery can be accomplished by installing Oracle Secure Backup in a zone to back up the zone as a regular backup and recovery client.

Backup and recovery of applications is supported in NFS, and backup and recovery procedures remain the same for snapshots and replication of NFS shares, as well as for tape using NDMP. To back up NFS shares, use an Oracle ZFS Storage Appliance system with NDMP. NDMP, sometimes referred to as dump mode, provides high-performance, block-level backups. Note, however, that the ZFS NDMP functionality does not permit restoration of individual files, so in order to restore a single file, the entire data set must be restored. For more information on using NDMP with Oracle ZFS Storage Appliance systems, refer to the Oracle white paper "NDMP Implementation Guide for the Sun ZFS Storage Appliance."

Zones stored on iSCSI LUNs cannot be backed up at the dump level with an Oracle ZFS Storage Appliance system—they must be backed up in ZFS block mode. This is a high-performance method that works well for restoring the entire zone. The ZFS block mode method does not support restoration of single files or directories; the entire data set must be restored. Single-file backup and recovery can be accomplished by installing Oracle Secure Backup software in a zone to back up the zone as a regular backup and recovery client.

For disk-only environments, zones can be backed up through the creation of snapshots, clones, or replication to another Oracle ZFS Storage Appliance system.

For disk-based backups, this solution includes both Oracle ZFS Storage Appliance systems and Zero Data Loss Recovery Appliance. The different configurations are designed to meet a variety of backup solution requirements. In general, Zero Data Loss Recovery Appliance provides the highest performance and serviceability, while an appliance from the Oracle ZFS Storage Appliance family provides flexibility and a lower-cost option.

Oracle recommends the following schedule for backups of Oracle Database:

Always Use a Fast Recovery Area

One vital database backup and recovery best practice is to deploy Oracle Database with a Fast Recovery Area (FRA), which is the location where the database stores all of its information for Oracle Flashback technologies, snapshots, database backups, rollbacks, and more. The FRA enables the database to protect itself, by enabling the database to be rolled back to a certain point in time and restored within a matter of seconds instead of minutes or hours using conventional backup and recovery methods. Consequently, database recovery time is limited by the speed of the device on which the FRA resides, and it should be located on the fastest performing storage possible. Oracle engineered systems are designed with the FRA built in, because placing the FRA on anything but Oracle Exadata internal storage or an external Exadata Storage Expansion Rack will lengthen the amount of time it takes for recovery. Exadata Storage Expansion Racks can be used for extra space for the FRA, as needed.

Database backups can, if desired, be excluded from the FRA and stored instead on Oracle ZFS Storage Appliance system. In this case, the FRA on Oracle Exadata can be configured to be much smaller, because space for the full and incremental backups is not required in the FRA. This configuration can provide cost savings, because lower-cost storage can be used for database backups, without sacrificing system performance.

There are other configuration parameters for Oracle Database that must be set in order to ensure optimal backup performance:

Best practices for Oracle RMAN configuration include the following:

Oracle engineers performing testing in Oracle labs have discovered that optimum restore performance depends on proper management of the backup chunk size. While the chunk size setting is not important during backups, the restore operation must have Oracle RMAN backups broken into the best-performing chunk sizes for individual environments or performance can suffer. Oracle recommends running tests in each individual environment—with the actual data—to verify that the chunk size to be used for Oracle RMAN restores is going to provide optimal performance.

The layout of each individual database determines performance. In addition, to increase recovery rate performance, create a restore service that runs across all available database nodes. The service is used by the Oracle RMAN restore command. Oracle RMAN automatically balances the restore load among the targeted instances.

Scale backup rates written to local disk in the FRA on an Oracle Database Appliance system by using an Oracle RAC configuration.

Scale backup rates written to local disk in the FRA on an Oracle Database Appliance system by using a single-instance and Oracle RAC One Node configuration.

Disk-only backups provide faster recovery times for data and logical corruptions and some tablespace point-in-time recovery (TSPITR) scenarios. Backups to disk also provide the ability to use backups directly—with no restore needed—by switching to a copy of the database, tablespace, or data file. Best practices for disk-based backup configurations include the following.

Care must be taken when configuring the network connections for tape-based backups. The following two sections detail configurations for connecting the media servers to the network.

Best Practices for Connecting Media Servers to the InfiniBand Network

When connecting media servers to the InfiniBand network for tape-based backups, do the following:

The media servers for tape-based backups can be connected with one or more Ethernet ports that are either 1 GbE or 10 GbE.

It is very important that the environment maintains consistent device addresses. In SAN environments running Oracle Linux, persistent bindings must be configured so that the device addresses do not change. If a device's address changes, the media servers cannot access the device until the device configuration within Oracle Secure Backup is updated. Please see My Oracle Support Note 971386.1 for an example of creating persistent bindings for device attachments.

Back Up the Oracle Secure Backup Catalog

The primary catalog backup configuration settings have been preconfigured, so only one step remains, which requires user intervention:

For detailed and up-to-date information, please refer to My Oracle Support Note 1558851.1.

Dean Halbeisen is a solutions manager at Oracle. He has over 20 years of IT experience and is an expert in enterprise computing solutions, most recently applying these practices to next-generation data center solutions, integrated systems, and Oracle engineered systems. In his current role, he is responsible for solution architecture and development around Oracle Optimized Solutions, including communicating about Oracle's systems, solutions, and technology strategies and roadmaps to customers, partners, and internal stakeholders.