Learn how to connect sensors to the Raspberry Pi and control them with Java.

This article focuses on using universal asynchronous receiver/transmitter (UART) interfaces to connect new modules that do the following:

In addition, because we won't have all UART interfaces you need, this article describes how to convert an I2C interface to UART using the SparkFun I2C/SPI-to-UART breakout board (SC16IS750). We'll also use a little mono audio amplifier, the SparkFun module TPA2005D1.

Note: The complete example code for this NetBeans IDE 8.0.2 project can be downloaded from the attached zip file at the bottom of this article.

Enabling UART on the Raspberry Pi

UART is a serial port that consists of two signals—a transmit signal (TxD) and a receive signal (RxD)—made available on pin 8 (BCM or GPIO 14) and pin 10 (BCM or GPIO 15), respectively, on the GPIO header. You can view the Raspberry pinout here.

Remember that all GPIO pins operate at 0 and 3.3 V logic levels, not the common RS-232 serial port level of +/- 12 V. If you wish to connect a UART device, you need a board or adapter to convert the higher signal levels to the lower GPIO signal levels. For example, you can use a MAX3232CPE transceiver and some capacitors. See this tutorial.

By default, the Raspberry Pi uses its built-in UART interface as the serial console. To have control of it, we need to run a few commands to release it.

First, back up the /boot/cmdline.txt file by running the following command:

Then, enter the following command from the command line to edit the file.

Change the following line in the file, from this:

Next, enter the following command from the command line to edit the /etc/inittab file:

Then change the following line in the file from this:

As the last step, reboot the Raspberry Pi.

Figure 1. Block diagram of the circuits we will create

Figure 2. Components we will use

Figure 3. Schematic of the circuits we will create

Connecting the GPS Receiver Engine Board

The EM-406a is a compact, high-performance, low power consumption GPS engine board. It uses the SiRF Star III LP Single GPS chipset, which can track up to 20 satellites at a time, and has the following features:

Let's now connect the device to the Raspberry Pi's GND, GPS Tx to UART RxD, GPS Rx to UART TxD, and VCC 5v pins, as shown in Figure 3, and create a Java ME 8 class called GPSEM406ADevice to control the GPS device. See Listing 1.

Next, create a class constructor that initializes and activates UART using the DeviceManager API and the UARTConfig class (see Listing 2) to establish the following conditions for serial communication and activate the input data listener to receive status from the GPS device.

Listing 2. Establishing the initial conditions for the GPS device and UART

Listing 3. Method to initialize the GPS device to talk the NMEA protocol

Then create the following format and get methods (see Listing 4):

Listing 4. Format and get methods

To read all UART data, we need to create a listener class called MyUARTListener that implements UARTEventListener with a synchronized method eventDispatched (see Listing 5).

When data is available, we parse it with the processNMEA method (see Listing 6). We use this method to read all the GPS data into a special String that begins with the $GPGGA tag.

Listing 7. Closing the UART object and freeing the listener

Let's now create the Test MIDlet class called TestGPSEM406A to receive the time, latitude, longitude, and altitude from satellites, as shown in Listing 8.

This is a breakout board for the SC16IS750, which is a handy chip used to convert I2C or SPI serial signals to a single-channel, high-performance UART interface.  The input pins of the SC16IS750 are 5.5 V–tolerant, so this board should work with both 3.3 V and 5 V controllers. The following are some of its general features:

This chip has the following registers (addresses are shown in hexadecimal):

To support these registers, create an enumeration called SC16IS750, as shown in Listing 9.

Let's now connect the SC16IS750 breakout board to the Raspberry Pi's 3.3 V, SCL, SDA, and GND pins, as shown in Figure 3, and create a Java ME 8 class called SC16IS750Device with its constructor using the control address to initialize the converter registers, as shown in Listing 10.

Listing 10. SC16IS750Device class with its constructor establishing the control address

The Emic 2 text-to-speech module is a multilanguage voice synthesizer that converts a stream of digital text into natural sounding speech. Its simple command-based interface makes it easy to integrate into any embedded system.

Here are some of its general features.

Let's now connect the Emic 2 module's GND, SOUT, and SIN pins to the SC16IS750 breakout board's GND, RX, and TX pins, respectively, and connect its 5 V pin to the Raspberry Pi's 5 V pin, as shown in Figure 3. Then, create a Java ME 8 class called  EMIC2Device with its constructor that creates an SC16IS750 object using class SC16IS750Device, as shown in Listing 12.

Listing 12. EMIC2Device class with its constructor creating an SC16IS750 object

We can connect an headphone to the onboard 1/8-inch (3.5 mm) audio jack, but if we want to use a little speaker, the SparkFun mono audio amplifier module TPA2005D1 is recommended, as shown in Figure 3, with an additional 10K volume control potentiometer. We must connect SP- and SP+ from the Emic 2 to IN- and IN+ on the amplifier module's connector.

Before running our TestEM406A MIDlet using NetBeans IDE 8.0.2, it is important to establish the appropriate API permissions. To do this, in the IDE, select project JavaMEDemos, and then right-click and select Properties to show the Project Properties window.  Select Application Descriptor, and then select the API Permissions tab. Include the following permission, as shown in Figure 4: 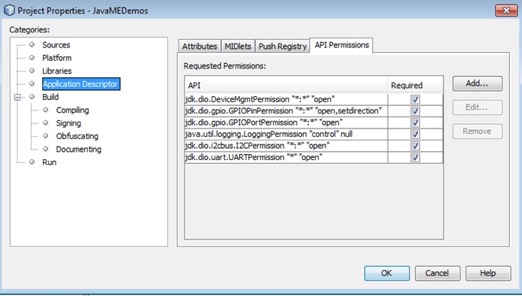 The Raspberry Pi has a UART port that can be used for serial communication with some devices such as the EM-406a GPS device, but remember that it is very important to check voltage levels, because this port works at 3.3 V, not at the classic serial level of +/- 12 V.

By default, the UART port is used by the serial console and it must be released before you can manipulate it.

Jose Cruz (@joseacruzp) is a software engineer who has been working with Java since 1998. He is a lead developer of Java, Java ME, and Java EE at Ferreteria EPA C.A. in Venezuela. From an early age, his hobby has been electronics. This has led him to combine computing with electronics and develop projects where Java and embedded devices such as Arduino and Raspberry Pi are used.