Inside a Java Mobile Application, Part 1

Those of you who attended the Oracle Technology Network (OTN) Java Hub or demos during a few recent Java conferences (for example, JavaOne, Devoxx, and JFokus) probably know the coffee machine that allows attendees to order a personalized coffee, the Computer Numerical Control (CNC) machine that creates user-designed badges, or any of the other "OTN Experiences." These OTN Experiences are demonstrations of end-to-end Java projects, spanning from embedded devices, through mobile devices, and onto cloud systems.

The focus of this article is on building mobile applications that allow attendees to consume the OTN Experiences. In a follow-up article, I will talk about how the OTN Experiences are connected to the web and how they are exposed using Oracle Cloud.

There are a few mobile apps in the Apple App Store and the Google Play Store that provide the OTN Experiences. Recently, the OTN demo app was released to support the OTN Experiences at the JFokus conference. You can find it in the App Store and in the Play Store. For this article, we will create a standalone Java client application that works on desktop, mobile, and embedded devices (such as the Raspberry Pi), and that provides the same user interface as the apps you could use at the conferences.

By using the Gluon Mobile IDE plugin, the Java client application can easily be installed on iOS and Android phones, without changing a single line of code. Gluon Mobile will adapt your code to the requirements of the native operating systems, and it leverages hardware-accelerated graphics using the JavaFX rendering system.

Getting the Demo App

For this article, we will use dummy back-end implementations, but as mentioned, in the next article we will replace this standalone behavior with the real cloud connection that is used to connect the mobile apps to Oracle Cloud and use the back-end functionality.

The code for this application is available in the repository at https://github.com/gluonhq/otnarticle1.git. Check out that repository using the following command:

Then run the code using this command:

You should see the following screen: 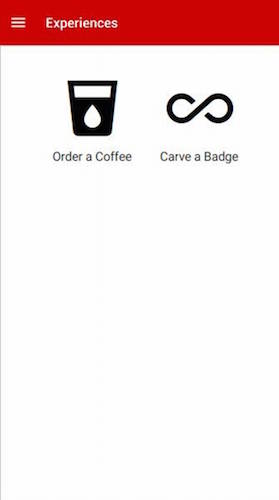 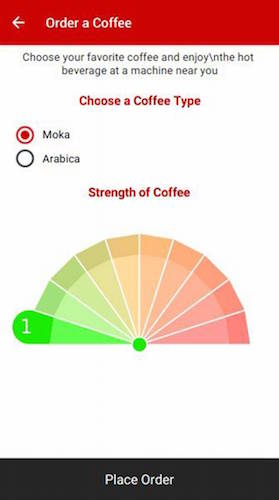 Figure 2. Screen for ordering a cup of coffee

The screens you see in the application are primarily intended to run on mobile devices, so you'll note that when running them on a desktop, the aspect ratio of the window is a similar shape. This allows developers to develop and test on a desktop system before deploying to a real mobile device for testing. However, as noted, the Gluon Mobile software stack makes it trivial to get the code onto a real mobile device. Using the following command, developers with an Apple computer who have the XCode tools installed can easily run the application on an iPhone or iPad that is connected to their system:

If you don't have a device connected, but you want to see how the app would look on a mobile device, you can run the following command:

Developers who have the Android SDK installed can install the app on their connected Android devices by running this command:

Running the application on a mobile device is not hard, but it is beyond the scope of this article. If you experience any issues, refer to the Gluon Mobile documentation.

I use NetBeans in this article, but the other IDEs follow a similar approach.

The OTN demo application is a Java client application, and it uses JavaFX for rendering its UI. One of the benefits of JavaFX is that the UI can be decoupled from the application's functionality. A UI can be designed using the FXML markup language. The most popular tool for doing this is Gluon Scene Builder, which can be downloaded.

Looking in the resources/com/gluonhq/otndemo/views folder, you will see that there are four FXML files, describing the four views in the application:

Although not required, in this application, a View corresponds to a view in the mobile application. Each of those FXML files has a corresponding Presenter class that hooks the UI to the code.

The starting point of the application is the OtnDemo class in com.gluonhq.otndemo. This class extends MobileApplication and, thus, it can leverage some out-of-the-box functionality offered by Gluon Mobile to make the application instantly able to be deployed across iOS and Android devices.

Note: See the Javadoc while reading this article.

The OTN demo application overrides the init() and postInit() methods. In the init() method, the different views are registered. The four views that are defined in the FXML files and are controlled by the respective presenters are added to the list of views. Gluon Mobile manages the transition between the views. Once the views are registered, we can define a Layer to be used by the NavigationDrawer. The items to be shown in the NavigationDrawer are controlled by a flag called AppView.Flag.SHOW_IN_DRAWER. We add the necessary flags to the views while declaring them in the OTNView class.

The Experiences view is the default view, and it is marked as the default view using the AppView.Flag.HOME_VIEW flag. Therefore, it will be shown when the application starts. The experiences.fxml file does not contain much content. But when the Experiences view is loaded, the ExperiencesPresenter's initialize method is called. This will create a GridPane that is shown at the center of the Experiences view. The GridPane contains two items, linked to two services that each has its own view: the CoffeeView and the BadgeView. Both the CoffeeView and the BadgeView have an FXML declaration (coffee.fxml and badge.fxml) and a controller class (CoffeePresenter and BadgePresenter).

The coffee.fxml file contains most of the view for the coffee service. Note that it contains a custom control for selecting the strength of the coffee, which was taken from the Medusa project created by Gerrit Grunwald. The badge.fxml file contains less content, and has most of its drawing code in the Presenter and in subclasses.

The FXML files have a style class defined that is used to style the nodes in the respective views via JavaFX CSS. All the styles are defined in the otn.css file.

When the user is ready to order a cup of coffee or print the badge, a request is made to a back-end service. In this first version of the OTN demo application, we don't make a real connection to a back end. Instead, we have a Service class that mocks the connection to the back end. In a next article, we will discuss the real Service class that works with the real back-end systems.

The methods for ordering a cup of coffee and requesting a badge to be printed are expected to make a request to the back end, which returns a unique identifier corresponding to the request. Our client application creates a quick response (QR) code based on this unique identifier, and then renders the QR code. The demo hardware that was used in the OTN demo areas read this QR code, and sent it to the back end to determine the details about the requested service.

The fake Service class we are using in this article will return a random identifier, and a QR code is generated and presented to the user.

Real-world applications are often more complex than simple demos or tutorials. A combination of multiple devices, hardware, and software should be taken into account. The data flow in an end-to-end application spans between embedded and mobile devices on one end and cloud systems on the other end.

In this article, we explored how Java and JavaFX are very well positioned to be your favorite building blocks for creating Java client applications that work on mobile devices.

Johan Vos started working with Java in 1995. He was part of the Blackdown team, porting Java to Linux. His main focus is on end-to-end Java, combining back-end systems and mobile/embedded devices. He received a Duke's Choice Award in 2014 for his work on JavaFX on mobile devices.

In 2015, he cofounded Gluon, which allows enterprises to create mobile Java client applications leveraging their existing back-end infrastructure. Gluon received a Duke's Choice Award in 2015. Vos is a Java Champion, a member of the BeJUG steering group and the Devoxx steering group. and he is a JCP member. He is the lead author of Pro JavaFX 8 (Apress, 2014), and he has been a speaker at numerous conferences on Java.