Interact with a USB scale to accurately measure your coffee beans and brew the perfect cup.

The Raspberry Pi comes preloaded with Java SE Embedded 8, so getting started with Java is as simple as typing the java command at the prompt. However, the ability to run Java on your Raspberry Pi wouldn’t be complete without an application to help perfect your coffee-brewing skills. This article takes a scientific approach to coffee brewing in order to obtain the perfect “cup of Joe.”

Communicating with a USB Scale

In order to precisely measure weight for coffee brewing, we are going to use a USB shipping scale. USB communication is based on a series of pipes (logical channels) that are connected to the device via endpoints. Furthermore, these endpoints are grouped into a set of interfaces. The protocol used by most shipping scales is simple one-way communication where the current scale value is repeatedly broadcast out over a single endpoint on the first interface.

To use the scale, simply plug it into one of the host ports on your Raspberry Pi and turn it on. It consumes only 16 mA, so it can be safely powered right off the Raspberry Pi USB bus.

The vendorId and productId show up when you plug in the scale and run the dmesg command. For the Dymo M10 scale they are 0x0922 and 0x8003, respectively. For its sister scale, the Dymo M25, they are 0x0922 and 0x8004, respectively. However, any compatible Stamps.com or DymoStamp scale should work fine as long as you change the vendorId and productId in the code.

For communication with the USB scale, we are going to use the usb4java library. This is an open source, JSR 80–compliant implementation of the standard JavaX-USB specification that has support for ARM Linux distributions such as the Raspberry Pi. You can download the latest version of usb4java from the project website.

Make sure to download both the core library as well as the javax extension. From the core distribution you need to grab the following JAR files:

And you need these additional JAR files from the usb4java-javax distribution:

Place all these files in a new folder called lib in your project directory, and add them to your project dependencies in your IDE of choice.

To test the data returned from the scale, we are going to use a single-class implementation of the USB scale protocol that returns 60 data points and prints out the results on the command line. This will be the basis for our coffee-brewing application.

The main method for our application is shown in Listing 2 and can be summarized as follows:

To ensure the scale is closed properly even in the case of an error or exception, we are using a try finally block.

Listing 3 shows the implementation of the first method, findScale, which discovers Dymo M10 or M25 scales using the JavaX-USB API. This calls the findDevice method, which contains code that traverses the USB device tree (see Listing 4).

Notice that we had to use the claim method that accepts a UsbInterfacePolicy. This allows us to force the kernel to detach from the USB interface so we can claim it for our application.

The implementation of syncSubmit is trivial, calling the same-named method on the UsbPipe:

However, the real work happens in the callback. To receive the callback, our class needs to implement the UsbPipeListener class, which has two required methods. The first is dataEventOccurred, which will be called as a result of invoking syncSubmit and contain the data returned from the scale. The second is errorEventOccurred, which will be invoked when there is a problem interfacing with the scale.

The data sent by these shipping scales is a simple byte array that contains six values. The protocol is not well documented, but it has been reverse-engineered by the open source community. The data is as follows:

Listing 6 shows the implementation of dataEventOccurred, which takes apart the byte array returned and prints out a human-readable scale value to the command line.

Besides doing a little bit of bit-shifting to get the weight magnitude, we also need to scale the weight by the scalingFactor returned in byte 3, as shown in Listing 7.

In the case of an error, the best we can do is log the error and continue (see Listing 8).

And the last method to finish the scale test is the close algorithm. This simply closes the pipe and interface cleanly so that the next application that tries to use the scale will be able to access it:

Read the full article at oracle.com/javamagazine  The subscription to Java Magazine is free 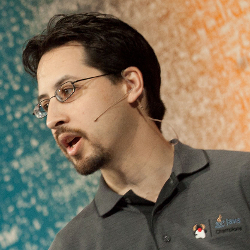 Stephen Chin is the lead Java community manager at Oracle, author of the upcoming Raspberry Pi with Java (McGraw-Hill), and coauthor of Pro JavaFX 8 (Apress, 2014). He is also a JavaOne content co-chair. Chin has presented keynotes at numerous Java conferences including JavaOne, where he is a four-time Rock Star Award recipient.