This is the second and final part of a two-part series on using Node.js, node-oracledb, sails-oracle-sp, and the Sails.js model-view-controller (MVC) framework to expose PL/SQL stored procedures as REST APIs and WebSockets.

The first part of this series discussed sails-oracle-sp's theory of operation in detail. This part walks through setting up a sample implementation that is composed of two parts: a RESTful web service that concurrently presents WebSocket counterparts to the REST APIs and an Angular.js single-page application as the user interface.  The web service uses Oracle Database's sample HR schema's EMPLOYEES and DEPARTMENTS training tables.

This example is a working system that demonstrates

Setting Up the System

This demo depends on having Oracle Database and access to the HR schema, Sails.js, Node.js, and so on. This section describes the steps for preparing a Linux system for this demo.

Download and install Oracle VM VirtualBox on your host system.

An Oracle Database 12c virtual machine (VM) is provided in an Open Virtual Appliance (OVA) file.  An OVA file is essentially an archive that includes a disk image and other supporting files that are suitable to be imported into Oracle VM VirtualBox as a VM.  This VM is based on Oracle Linux 7 and has Oracle Database 12c Release 1 Enterprise Edition installed.

Download the OVA here. Launch it by double-clicking it and then import it into Oracle VM VirtualBox.

Once you've imported the VM and launched it, you need to configure it.

Set the VM's memory for 3 GB. In the VM's menu, select Machine->settings-> system.

Install Node.js by performing the following the steps to download Node.js, update the npm package management system, and install Bower. (Bower is a package manager specialized for client-side dependencies.)

Install Node.js in the /usr/local directory. Then use following command to copy the files to appropriate subdirectories under /usr/local:

Installing Node.js provides npm. npm is frequently updated and Node.js might not provide the most recent version of npm. To obtain the latest stable version, issue the following command:

As root, issue the commands shown in Listing 9 to install these RPMs.

Node-oracledb depends on access to the Oracle Instant Client libraries.

Listing 10: An environment variable required to run Sails.js as the oracle user

As an aside, in this special case, using LD_LIBRARY_PATH is not strictly necessary because Oracle Instant Client was installed using the rpm utility. The node-oracledb installer recognizes this configuration and links using the rpath linker options. (See node-oracledb's installation manual for rpath information and tips for modifying rpath.) That said, setting LD_LIBRARY_PATH will be necessary when installing from Oracle Instant Client zip files or for users who are linking to ORACLE_HOME libraries.

Our working example of sails-oracle-sp is in a git repository.  You will need to install git to clone this repository to this VM. As root, issue the command shown in Listing 11 to install git.

Listing 11: The command for installing git

Listing 12 shows the steps necessary to download and install the remaining components as the oracle user.  These components include Sails.js, sails-oracle-sp, and node-oracledb.

The npm package management system for Node.js facilitates the installation, upgrading, removal, and so on of node modules.  It is conceptually similar to Linux package managers such as yum and rpm.

Bower is installed by npm in the use case shown in Listing 12.

Run the commands shown in Listing 12 to complete the installation of sails-oracle-sp and its dependencies. Here is a description of what the commands and system output mean:

Now edit $HOME/.bashrc and add the line shown in Listing 13.  Later, the sails lift command will fail unless this path is added to the PATH environment variable.

Listing 14: The connections.js file's settings that are suitable for the Oracle Database database preinstalled on this VM.

Issue the commands shown in Listing 15 to install the various PL/SQL packages.  The order in which the commands are executed is important. Here is a description of the commands:

Issue the commands shown in Listing 16 to launch Sails.js.  Immediately afterward, clients can connect to the REST APIs and WebSocket connections presented by Sails.js. This example uses an Angular.js web page as a client.

Taking the Example Application for a Spin

Sails.js is just middleware that presents REST APIs and a WebSocket interface.  A front end is still required for a UI.  The example application uses an Angular.js web page as a front end.  One advantage of using Angular.js is that applications are just as usable on smartphones as they are on desktop computers in spite of zero extra code written for the purpose of adapting the applications to run on smartphones.

The UI is just a single page Angular.js application with a couple of tabs: a Department tab and an Employees tab. These tabs each present a form that enables users to modify records in Oracle Database's sample HR schema's EMPLOYEES and DEPARTMENTS tables. Figure 1 shows how the Department tab appears.  The Employees tab has a similar appearance and behavior.

The back end's CRUD routines can be invoked by either REST APIs or WebSockets. In theory, the front end could be anything capable of invoking REST APIs or sending CRUD commands via WebSockets (for example, a smartphone app, a .NET app, or a home security system). Our example UI uses REST APIs for CRUD operations and uses WebSockets to receive push notifications.  I chose to implement the front end as an Angular.js single-page application because then only a browser is required to test the system.

These are this application's most noteworthy features:

3. In any specified URL, replace localhost with the host's IP address.

In the VM, point the Firefox browser to the URL shown in Listing 17, replacing <em>localhost</em> with the host's IP address. Afterward the browser will present the example application's page.

Figure 1 shows the Department tab.  Those who are familiar with the HR tables might notice some uncanny similarities. 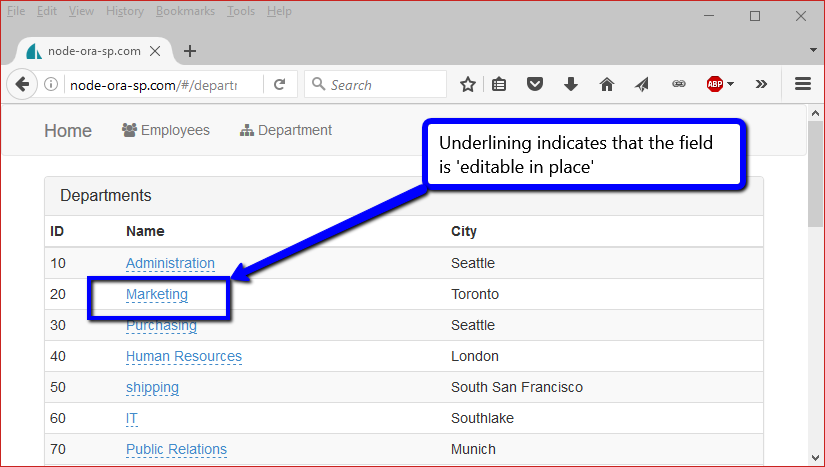 The lifecycle of a field update attempt is as follows:

If, for whatever reason, the attempt to update a field in the database fails, Sails.js will fetch the previous (unchanged) data to present to the user.  If the data presented by the web page remains unchanged, the user will see that the change attempt failed in real time. This functionally is the same as C++'s Strong Exception-Safety Guarantee: an exception results in the system's state being unchanged.

Ideally, of course, the UI should also present an error message from the database to advise the user as to why the update attempt failed.  That said, it is more important to show the user unchanged data so that the user does not think that a failed change attempt actually succeeded.

In pursuit of improving the user experience, this example shows a department's location in terms of city name instead of the location's foreign key. I added a stored procedure family for the LOCATIONS table.

The example application's UI is based on Angular.js. Its two-way data binding provides automatic bidirectional updating between the Document Object Model (DOM) and its internal copy of the data—called a model—which is presented to the user via the DOM. (Both Sails.js and Angular.js have entities that are called "models." The Sails.js model and the Angular.js model are very different from each other.)

To see this feature in action, open another tab in Firefox and point it to the URL shown in Listing 17.   At this point ,you should have the application presented on two browser tabs.

There are a number of applications that benefit from presenting volatile data in real time. Examples include stock tickers, telemetry from a remote sensor, alarms, and so on.

For example, in the simple demonstration system, a stored procedure raises an exception when the user specifies a negative salary. Figure 2 shows the error message the UI presents when this exception is raised.

Figure 2: Error message shown when negative salaries are rejected by the database

In this scheme, only the database has any real comprehension regarding exceptions and how to process them.  The UI is limited to presenting textual error messages when an exception is raised.  The entire technology stack between the database and the UI is simply a pass-through mechanism that is oblivious to nature of the exception being handled.

Sails-oracle-sp caches the application's exception error messages, which it obtains from the database, when Sails.js starts up. Listing 18 shows the stored procedure that returns a result set composed of all exception numbers and their text messages.  When sails-oracle-sp receives an exception, it finds the message mapped to the exception's number in its cache and presents it via the REST interface to the UI.

Listing 18: Example of the stored procedure that returns all exception error messages

Separation of concerns is a design principle that reduces lifecycle maintenance costs by separating a system's concerns into distinct sections.  In this example application, the database is concerned with business logic and data persistence. The UI is concerned with presentation logic.  The middleware (that is, Sails.js, sails-oracle-sp, and node-oracledb) is solely concerned with interconnecting the database with the UI.

Node-oracledb supports the separation of concerns in node-based applications. Embedded SQL can be eliminated from the middleware because node-oracledb supports stored procedure calls.  Consequently, all considerations about table structure, business logic, and so on can be factored into the database; where they belong.

Node-oracledb, sails-oracle-sp, and Sails.js can be used to create middleware that, in exchange for the trivial effort of creating Sails.js models, will present REST APIs and WebSocket interfaces for Oracle Database PL/SQL stored procedures.  Because the middleware layer requires little coding, the main development costs are concentrated in the database and the front end—that is, on the actual application—instead of on middleware glue logic.

The front end can be any application that can use REST APIs or WebSockets, including UIs such as web pages, smartphone apps, or systems without user interfaces (for example, machine-to-machine apps).

Sails-oracle-sp's regimented stored procedure naming scheme constrains the possible stored procedure names.  The interface package scheme described in part 1 of this series can adapt a Oracle Database legacy database to Sails.js without disturbing a system that is already in production.  And, of course, the Sails.js/sails-oracle-sp/node-oracledb stack is very suitable for new systems.

John Hendrix has been a software consultant for 20 years. His primary experience is in embedded programing, computer telephony (prepaid calling systems and SS7) and Oracle Database stored procedure development. Hendrix is a unit testing enthusiast and the cofounder of Nethoncho, LLC, a network planning and monitoring company.