Software in Silicon: What It Does and Why

The Software in Silicon design of the SPARC M7 processor, and the recently announced SPARC S7 processor, implement memory access validation directly into the processor so that you can protect application data that resides in memory. It also includes on-chip Data Analytics Accelerator (DAX) engines that are specifically designed to accelerate analytic functions. The DAX engines make in-memory databases and applications run much faster, plus they significantly increase usable memory capacity by allowing compressed databases to be stored in memory without a performance penalty.

The following Software in Silicon technologies are implemented in the SPARC S7 and M7 processors:

This article focuses on Silicon Secured Memory and SQL in Silicon.

The In-Memory Query Acceleration and In-Line Decompression capabilities, jointly referred to as SQL in Silicon, are combined to maximize the use of memory capacity, bandwidth, and CPU cores, which has a big impact on performance. The SQL in Silicon capabilities are performed by the Data Analytics Accelerator (DAX) engines that are specifically designed into the SPARC M7 chip to accelerate analytic queries.

The following sections describe the Software in Silicon features of the SPARC S7 and M7 processors in more detail and provide examples of how they can benefit your applications.

The primary function of the Silicon Secured Memory feature is to detect and report memory reference errors. In multithreaded applications, lots of threads work on large, shared memory segments. While managing the allocation and release of shared memory segments, multithreaded applications can run into various coding problems that are time-consuming to diagnose. Two of these problems are

Figure 1 illustrates the silent data corruption problem using a simplified example. There is a memory area that is shared by many processes, and there are two application threads running: Thread A and Thread B. The threads are color coded blue and green, respectively, to demarcate the memory areas that they should be accessing. However, sometimes while the application is running, Thread A starts writing to Thread B's green area by mistake. This can happen if Thread A allocates memory and subsequently frees it, but holds on to a pointer to it. Later, when Thread B later takes ownership of the memory space, if Thread A uses its obsolete pointer, Thread A will act on memory that is now owned by Thread B. If this malfunction is not caught immediately, it will be detected only when Thread B reads that memory location. In such a case, Thread B has data that has been silently corrupted by Thread A. This corruption manifests itself as a software bug with serious consequences, and such silent data corruptions are extremely difficult to diagnose. 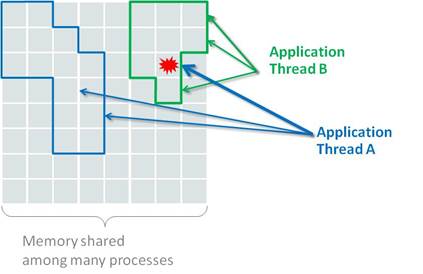 Figure 2 illustrates the problem of buffer overruns. In this case, an application has a memory area allocated to it, but it erroneously starts writing or reading data beyond this allocated area. Sensitive data can be corrupted or leaked into other memory locations, and the application that owns the data is not aware of this. For example, a malicious attack could cause a catastrophic security breach that allows another application to read sensitive information that has been mistakenly made available to it.

Figure 2. Buffer overrun caused by Thread B using memory outside of its allocated area

The Silicon Secured Memory feature enables faster detection of memory reference errors such as silent data corruption. As illustrated in Figure 3, a key in each memory pointer is used to indicate the memory version, or "color." During the process of memory allocation, a corresponding code is written to the memory. When this memory is accessed by any pointer, the key of the pointer attempting the access and the code of the memory being accessed are compared by the hardware. If there is a match, the access is legal; if there is no match, the memory reference error is caught immediately. 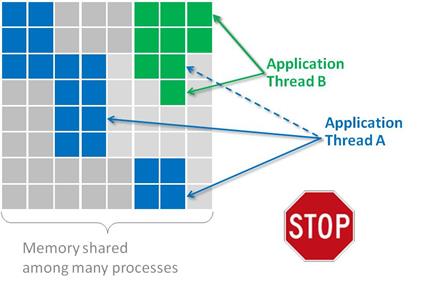 In Figure 3, the memory allocated to Thread A is blue and the memory allocated to Thread B is green. When Thread A attempts to access the green memory area of Thread B (depicted by the dotted blue line), the memory version is compared to the pointer's four-bit pattern. Because the two patterns do not match, the problem is flagged immediately by the processor and relayed to the application, as indicated by the stop sign. This enables the application to take immediate action and drastically reduces the time required for application developers to troubleshoot such memory reference bugs.

Similarly, the Silicon Secured Memory feature solves the problem of buffer overruns, as shown in Figure 4. Using the same memory versioning described earlier in this article, if an application attempts to read data from or write data to unallocated memory areas, a flag is raised by the processor, which allows corrective action to be taken right away. This enables faster bug detection as well as improved capability for application developers to develop extremely secure applications. 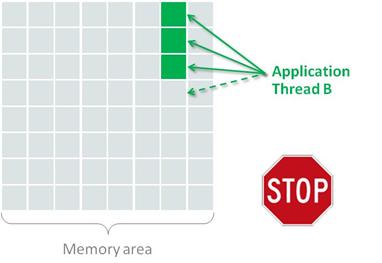 With the growing size of information stored in today's databases, it is increasingly critical to access and use the right information. Compressing stored data to reduce the storage footprint is a key business strategy in every IT system design. At the same time, any enterprise performing analytics to shape its future business opportunities needs the ability to access, decompress, and run fast queries on the stored data. Oracle's software engineers incorporate various features into Oracle Database to effectively leverage the hardware resources—such as cores, I/O channels, and memory—of the underlying server. Oracle Database follows a "shared everything architecture" that allows flexibility for parallel execution and high concurrency without overloading the system.

The In-Memory Query Acceleration and In-line Decompression features of the SPARC S7 and M7 processors were designed to work with Oracle Database In-Memory, which enables existing Oracle Database–compatible applications to automatically and transparently take advantage of columnar in-memory processing without additional programming or application changes.

The primary design goal for Oracle Database In-Memory was fast responses for analytic operations. The traditional way of storing and accessing data in a database employs a row format, which is great for online transaction processing (OLTP) workloads that perform frequent inserts and updates and handle report-style queries. However, analytics run best with a columnar database format. With Oracle Database In-Memory, it is possible to have a dual-format architecture that provides a row format for OLTP operations and a column format for analytic operations.

Oracle Database In-Memory populates the data in the in-memory (IM) column store, which provides various advantages. For example, a set of compression algorithms is automatically run on the data being stored in the IM column, resulting in storage savings. Then, when a query is run, it can scan and filter the compressed data. The volume of data scanned during the query is far less than when the query has to run on uncompressed data. The IM column store creates in-memory compression units (IMCUs), as shown in Figure 5. The in-memory columnar data is fragmented into these smaller IMCUs so that parallelization is possible when a query is run on all the data. 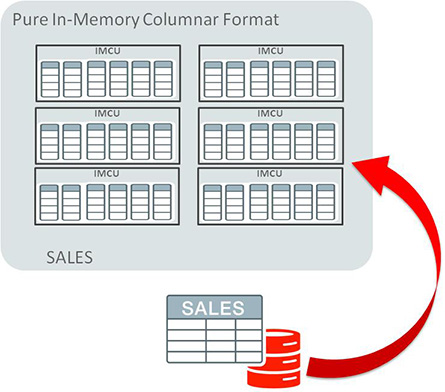 In the SPARC M7 processor, Oracle introduced eight data analytics accelerators (DAX), which are hardware units within the processor that are optimized to handle database queries quickly, each with four pipelines, or engines. In the case of the SPARC S7 processor, it includes four data analytics accelerators (DAX), also with four pipelines, or engines. The accelerator engines can process a total of 32 independent data streams in a SPARC M7 processor (and 16 in the S7 processor), offloading the processor cores to do other work. These accelerator engines are in addition to the cores that are present in both SPARC processors, and can process query functions such as decompress, scan, filter and join. Each thread in a SPARC M7 or S7 core has access to all the accelerator engines and can utilize them for various functions. Each accelerator is connected to the on-chip level 3 (L3) cache for very fast communication with the cores.

Example of How In-Memory Query Acceleration Speeds Up Database Queries

Imagine that one afternoon a manager is working on a quarter-end report when, for some reason, her boss asks her to go count the number of cars in the parking lot. The manager could go out to the lot and start counting the cars from start to finish, or she could call upon the help of team members. This relieves the manager from the job of counting parked cars, and she can get back to working on that important report. In a few moments, the team members give the manager the result, which is then happily passed on to the boss.

Similarly, in the SPARC S7 or M7 processors, when a core receives a database query, it can offload it to an accelerator engine. After the query is offloaded to the accelerator engine, the core is free to resume other jobs, such as higher-level SQL functions. The accelerator engine runs the query and gathers the result, which it puts in the L3 cache for fast communication with the core. The core is notified about the completion of the query, and it picks up the result from the L3 cache. This query offload feature provides extremely fast query processing capabilities for the processor while freeing the cores to do other functions.

The other advantage of this query offload is the parallelization that is facilitated by the 32 accelerator engines within each SPARC M7 processor (16 in the SPARC S7 processor). Each core has access to all the accelerator engines and can use them at the same time to run a single query in a completely parallel fashion. This parallelism is done by the processor and does not require the application code or the database application to perform any extra operations. The accelerator engines can take data streams directly from the memory subsystem through the processor's extremely high-bandwidth interfaces—which can reach 160 GB/sec. Therefore, queries can be performed on in-memory data at top speeds determined by the memory interface, rather than being controlled by the cache architecture that connects to the processor cores.

As mentioned above, Oracle Database In-Memory organizes the columnar data in chunks of compressed data called in-memory compression units so the data can be worked on in parallel, rather than it being one big set of data.

The following example demonstrates all the query optimizations and accelerations that happen when an Oracle Database In-Memory query is run on a SPARC S7 or M7 processor. Suppose a query is being run to find 'Total Number' of cars of the brand 'ABC' sold in the year '2005' over a set of data using the in-memory column store.

Example of How In-line Decompression Speeds Up Database Queries

SPARC processor engineers and Oracle Database developers identified this as a performance bottleneck and not an optimal way of using memory bandwidth, because a huge amount of data is being read and written for the two-step process.

The SPARC S7 and M7 processors have the capability of decompressing data and running the query function in a single step using its accelerator engines, as shown in Figure 6. This provides an immense performance boost, because multiple reads and writes do not need to be done. The sequence is as simple as the following:

The extra overhead of reads and writes for evaluating the query is circumvented. This speeds up the overall query execution time as well as optimizes the efficient use of memory bandwidth by skipping unnecessary decompression read and write steps. 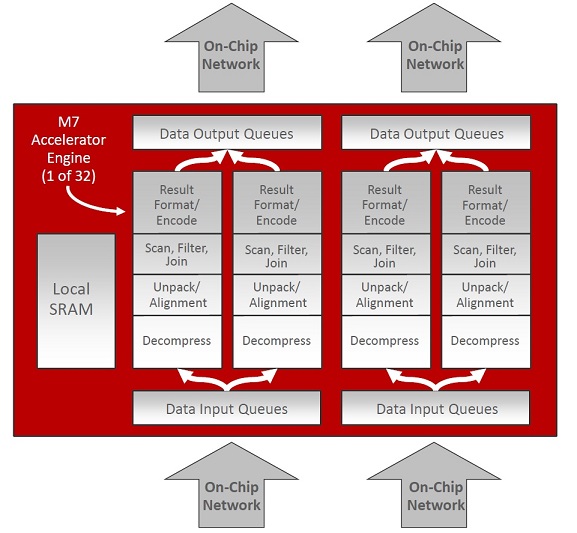 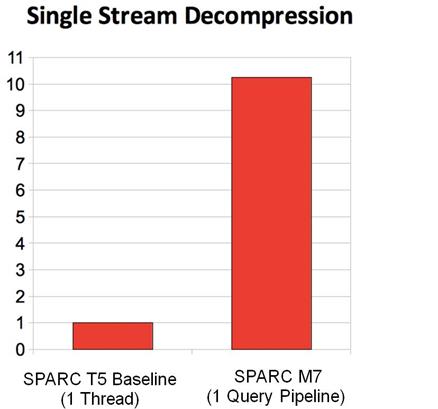