by Greg Jumper and Kumaraswamy

Learn how to increase the speed of your analytic applications by using the Data Analytics Accelerator (DAX) API and DAX coprocessors.

In March 2016, Oracle introduced the DAX API library, which enables you to create high-performance applications that can process and analyze large amounts of data effectively.  The DAX API allows you to use stream-processing techniques to efficiently manipulate large amounts of data in memory, by taking advantage of the hardware acceleration that is available on Oracle's latest SPARC microprocessors.  The volume of data stored in databases is growing exponentially and the need to analyze these large volumes of data in real time to run a variety of reports is a pressing reality of the times. Analytic applications need to access, decompress, and run fast queries on the stored data. You can significantly increase the speed of your analytic applications by using the DAX API. DAX-enabled applications can run on any SPARC system. However, the latest generation of SPARC M7 and SPARC S7 processor–based servers from Oracle  include DAX coprocessors that are able to run analytic applications even faster by offloading analytic functions onto the DAX coprocessors.

What Is the DAX API Library?

The large memory capabilities of today's server systems enable very efficient manipulation of large data sets. Stream-processing techniques allow efficient use of system resources by structuring memory operations as regular patterns that can be accelerated by the DAX coprocessors. The DAX API provides a rich set of stream-processing operations that allow you to take advantage of the hardware acceleration on Oracle's latest SPARC systems. The DAX API supports the following operations on data that is streamed to and from memory:

The DAX API operates on data as it is loaded from memory without incurring additional latency.

The Extract operation unpacks and, if required, decompresses a data stream to produce a padded-byte output stream.

A data stream can be both packed and compressed at the same time. Packing eliminates unnecessary space in a data stream, and compression replaces a verbose data stream with a more-compact equivalent that contains the same information. The compression format can be run-length encoding (RLE), zip, or both. Table 1 shows how the DAX API supports the input formats with optional RLE and zip compression.

The DAX API can unpack the 2-byte stream as four padded bytes:

The unpacked bytes can be operated on directly without the need to shift and mask bits to access the subfields of the bytes.

In this example, suppose the packed data stream is compressed by using the RLE or zip methods. The DAX API can decompress and unpack the packed data in a single operation.

The Scan Value operation compares each element in the input data stream with a user-supplied value.  If the comparison is true, the corresponding bit in the output bit vector is set to 1; otherwise, it is set to 0, for example:

The example in Table 2 shows the bit vector output values from a Scan Value operation.

The Scan Value operation can accept a run-length encoded (RLE) input stream in which each data element is implicitly repeated a number of times. A per-element repeat count is read from a secondary input stream.  The DAX coprocessors concurrently read the input streams, replicate each element, perform the comparison operation, and write the result to the output stream. RLE is an effective data compression technique when consecutive data elements commonly have the same value, such as in a sorted stream with duplicates allowed. You can use it to reduce the memory required to store the input stream, with no loss of performance at query time. For example, if the original data stream is this:

The RLE representation is this:

The example in Table 3 shows the bit vector output from a Scan Value operation with RLE input.

The decoder contains up to 1024 symbols of 1 to 8 bytes each, with some constraints that are not covered here. The compressed stream consists of a sequence of codewords, where a codeword is an index into the symbol table.

For example, suppose the original data stream has the following 4-bit elements, in hexadecimal:

Also supposed that the decoder shown in Table 4 is used.

The zipped representation is the following:

And the bit vector output from a Scan Value operation is shown in Table 5.

The Scan Value operation can also output the index of the input element where the comparison result is 1. The index is written as a 2- or 4-byte big-endian word.

The example in Table 6 shows the ones-index output from a Scan Value operation.

This operation supports the following comparisons:

The Scan Range operation compares each element in the input data stream with a range of values defined by a lower and an upper value. If the comparison is true, it outputs 1. It outputs 0 otherwise, for example:

The example in Table 7 shows the output values from a Scan Range operation.

Similar to the Scan Value operation, the Scan Range operation can output the index of the input element where the comparison result is 1. The index is written as a 2- or 4-byte big-endian word.

This operation supports the following comparisons:

The Select operation checks each element in the input data stream and outputs the element if and only if the bit at the corresponding location in a user-supplied bit vector is 1, for example:

The example in Table 8 shows the output values from a Select operation.

The Translate operation can also produce an inverted output, for example:

The example in Table 9 shows the output values from a Translate operation.

The Translate operation can also output the index of the input element where the translation result is 1. The index is written as a 2- or 4-byte big-endian word.

The example in Table 10 shows the ones-index output from a Translate operation.

The compress operation zips the data in the input data stream and writes the codeword stream to the output buffer. The output buffer is a contiguous stream of fixed-width codewords with no padding between each. The codec provides the width of the codeword, which can be 1 to 10 bits wide, and each codeword is big endian. This operation returns an encoder or decoder that you can use to unzip the data.

The DAX hardware does not compress the data. Compression is implemented in software.

The DAX API performs logical operations such as AND, OR, and XOR on the input and output vectors.

DAX Coprocessors on the SPARC M7 and SPARC S7 Processors

However, in certain cases, such as analytics and report generation, it is advantageous to store the data in a column format. In a column format, Oracle Database In-Memory stores each of the attributes about a transaction or record in a separate column structure. This is ideal for analytics and report generation because it allows for faster data retrieval when a query selects only a few columns from a large data set. 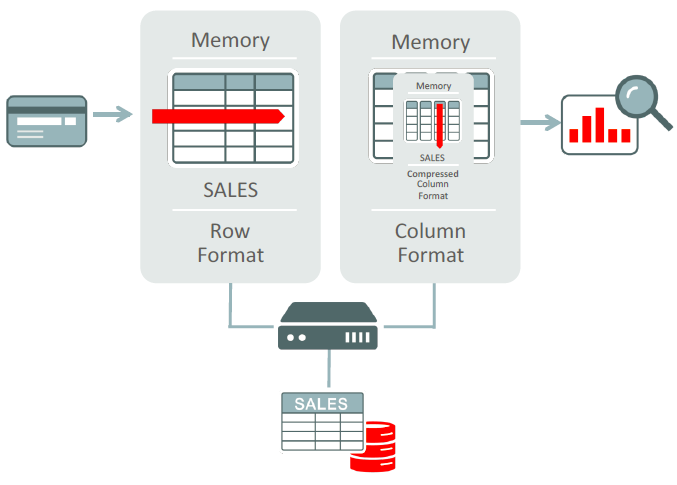 The simple database shown in Table 11 has 4 rows and 3 columns.

In a row format, the data in Table 11 would be stored as follows:

However, in a column format, the data in Table 11 would be stored as this:

With data manipulation language (DML) operations—such as insert, update, or delete—a row format is very efficient because it manipulates an entire record in one operation. A column format is not so efficient at processing row-wise DML operations, because to insert or delete a single record in a column format, all the columnar structures in the table must be updated.

You can access Oracle's Software in Silicon technology by registering at the SwisDev website, which offers free development and test environments as well as sample use cases. To access the DAX API and test how it can speed up your analytics applications, register at swisdev.oracle.com/DAX. To test all other Software in Silicon features, such as Silicon Secured Memory, register at swisdev.oracle.com.

In Oracle Database 12c, SQL query processing is optimized to use the DAX API to improve query performance significantly. Additional sample programs have been developed to illustrate the use of the DAX API. The DAX API will continue to evolve over time as more applications are developed and more analytic functions are added.

Greg Jumper is a principal software engineer in the Oracle's SPARC/Oracle Solaris organization with over 18 years of experience at Sun Microsystems and Oracle. He led development of the Oracle Solaris software for SPARC M7 DAX support and works on software projects to support new SPARC platforms and to further integrate Oracle Solaris with Oracle Database.

Kumaraswamy is a principal technical writer in the Oracle's Solaris organization with over 10 years of experience at Sun Microsystems and Oracle. He works on creating developer-related content and handles the developer documentation for Oracle Solaris.