User reports with custom actions may not be correctly persisted

(Opening the report as a user-defined report is fine for testing, though.) 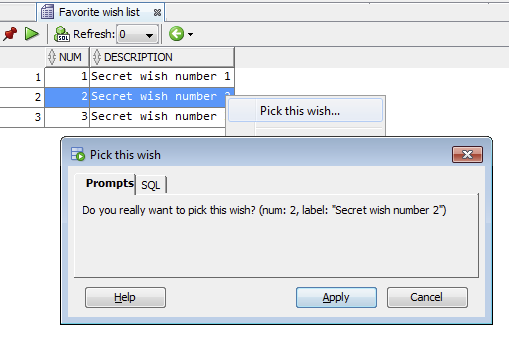 Corresponding UserReports.xml file—manually edited in order to restore newlines and indentation in the <item> element.

Remark: if you're bothered about downloading untrusted content, so am I—I'd have merely copy-pasted the XML markup into a code section, but sorry, the Forums software barks at that markup and won't let me do that: "Access Denied, You don't have permission to access "http://splash.oracle.com/tech/developers/post/discussion/sql_developer?" on this server. Reference #18.c721102.1639415785.2338a889" says the popup 😖

If you compare the markup from the original report file (favorite_wish_list.xml) and from the corresponding UserReports.xml file, you'll notice that the original contents of the <sql> element in the <confirmation> element has been improperly replaced with that of the "main" <sql> element of the <item>.

This is obviously wrong, and in this particular case it causes unsubstituted placeholders in the confirmation message. In real-life use cases I have also seen situations in which the entire action would be broken (hence do nothing at all), but I couldn't reproduce that in a simple test case.