SET SERVEROUTPUT ON results in a database call for each and every command (bug?)

(The web page for Adrian Billington's utilities for Oracle developers is here; the source code of the mystats.sql script is here.)

Actually, for reasons explained in this post, I used a slightly modified version of the original script, in order to specify explicit paths for spool files.

Given that the mystats.sql script is not only clever, but also very simple, I expected it to run within the blink of an eye, and I was very disappointed: using SQLcl, it took a noticeably long time to run the following:

How long? More than 1 full second, perhaps 2 seconds... I didn't time it exactly, but it was long enough to warrant a quick performance investigation, all the more so as running the same in SQL*Plus did not take longer than the blink of an eye—so there was a huge feeling of a performance difference here.

Using the JDBC Profiler in VisualVM, the culprit was found out quickly, as you may see in the following screenshot:

The JDBC Profiler lists statements in decreasing order of total (elapsed) time. The first statement in the list is the one in which the most time was spent. On the above screenshot you may see that this statement was executed 106 times, for a total of 153 ms.

(Remark: please do not pay attention to the timings in the above screenshot: it was taken on a test computer with the database running in a local virtual machine, so here the client-server latency is very quick, in the 1 ms ballpark... But picture yourself in a different, real-world customer site, with a remote database and a client-server latency closer to 10 ms, and then the above 153 ms expand to no fewer than 1.5 second... and that feels slow.)

The SQL id for this statement (which you may find by tracing the session) is 5yaurap8h97nx, and it reads as follows:

Yes, that's the PL/SQL block used by SQLcl / SQL Developer to fetch lines from DBMS_OUTPUT's internal buffer once SERVEROUTPUT has been switched to ON.

(In the session trace file, it appeared that the value of the :maxbytes input bind variable was equal to 1000.)

But wait! There's exactly 1 and only 1 PL/SQL block in the mystats.sql script. (And SQLcl wraps it into what appears as the 2nd statement in the JDBC profile; that block was executed only once, with an elapsed time of 60.3 ms above). And further, there was no output line to be fetched at all: as shown above, @mystats start does not output anything (the readout comes with @mystats stop). So why had SQLcl executed the output-fetching statement (SQL id: 5yaurap8h97nx) 106 times?

The JDBC Profiler includes the call stacks for each JDBC statement call; this enables to figure out where in the client application JDBC calls are originating from. The following screenshot shows the call stacks in their full glory—just to briefly lift the veil and see how complex the implementation may be... 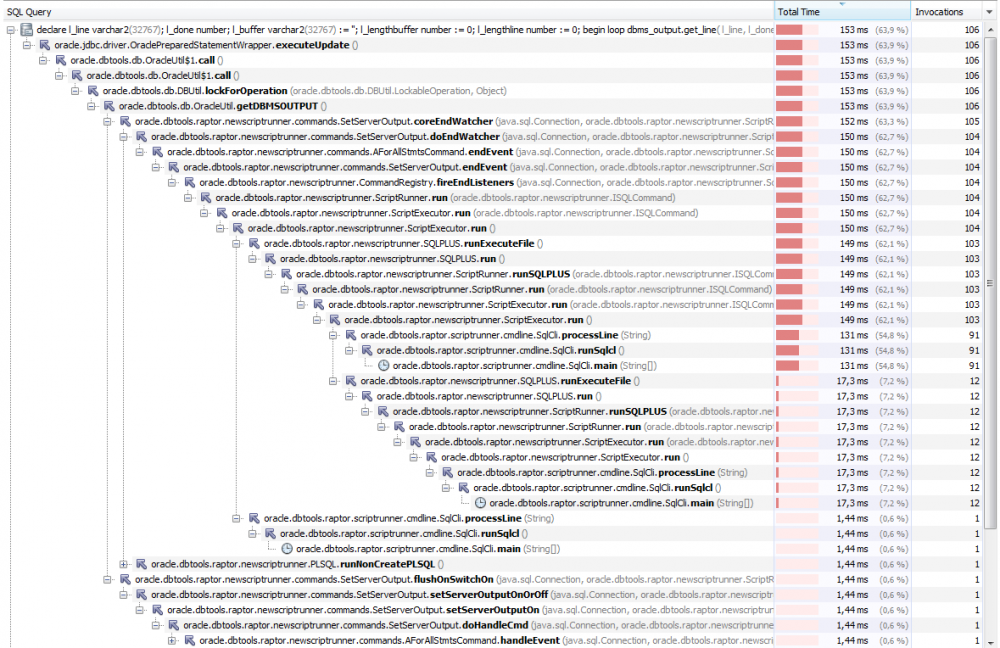 Meanwhile, profiling seems to work, so let's carry on with our tests.)

As you can see, the output-fetching statement (SQL id: 5yaurap8h97nx) has been called exactly once so far.

So let's type in a SQL*Plus command; note that this is a client-side only command, one which doesn't require any database call at all, in principle.

Do you see a pattern here?

All the above commands are client-side only commands: they do not make, nor require, any call to the database, so it seems obvious that they should not cause any change to the contents of the DBMS_OUTPUT buffer. So why is SQLcl trying to fetch more output lines?

So there you have it: when SERVEROUTPUT is ON, SQLcl makes a database call to get new lines from the DBMS_OUTPUT buffer after each and every command, even commands which do not make any call to the database.

And if running elaborate SQL*Plus scripts, such as Adrian Billington's mystats.sql utility (which is far from sophisticated by the way, but uses many SQL*Plus client-side commands such as COLUMN, DEFINE, UNDEFINE, etc.) and the database client-server latency is high, say 10 ms or more, this behaviour results in scripts being noticeably slower in SQLcl than they are in SQL*Plus, due to the many additional client-server round-trips.

(This is the opposite of the common usage, which consists of placing the SET SERVEROUTPUT ON command at the very beginning of any script using DBMS_OUTPUT... 😕)