This article, which is the first in a new series, focuses on using two types of interfaces, GPIO and I2C, to create a prototype two-wheel self-balancing robot using the following modules:

Note: The complete example code for this NetBeans IDE 8.0.2 project can be downloaded here.

The MPU-6050, the PCA9685, and the L298N modules create a feedback control loop, as shown in Figure 1, which balances the robot and automatically corrects its position upon disturbance.

The robot is prevented from falling by giving acceleration to the wheels according to the robot's inclination from the vertical axis. If the robot tilts at an angle, then in the frame of the wheels, the center of mass of the robot will experience a pseudo force that will apply a torque opposite to the direction of tilt. 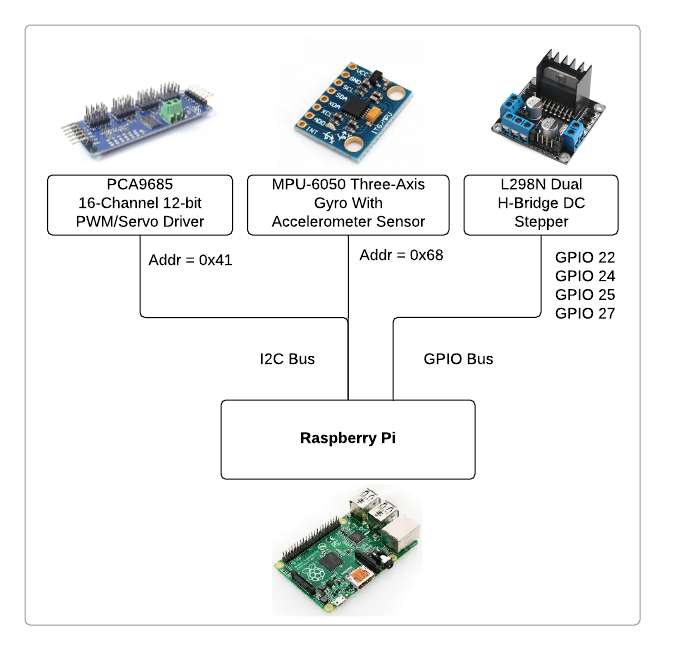 Figure 2. Block diagram of the circuits we will create

Figure 3. Electronic components we will use

Figure 4. Mechanical parts we will use

Figure 5. Schematic of the circuits we will create

Figure 6. Two-wheeled prototype of balanced robot we will create

Balancing robots represents the classic inverted pendulum problem, in which a large mass is placed at the end of a pole. The pole is free to rotate around the base, and the base is free to move in the plane perpendicular to the vertical. The goal is to keep the pole vertical by moving the base in response to changes in the angle.

Figure 7 shows a two-wheeled robot with a three-axis accelerometer to measure tilt angle θa and a single-axis gyroscope to measure dynamic tilt angle θg. Both angles must be fused by using a filter to obtain a final tilt angle θ. In our case, we will use a complementary filter, as shown in Figure 8, which controls the speed of the motors based on the angular velocity information. 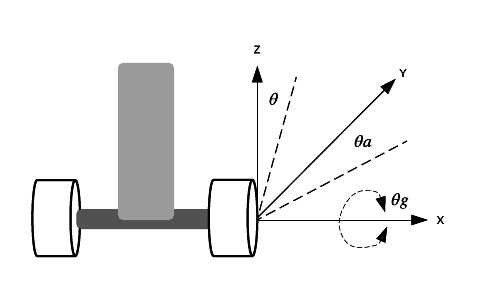 Figure 7. Robot with three-axis accelerometer and a single-axis gyroscope

We obtain the θ angle reading from the accelerometer in a continuous loop by using a low-pass filter, and we sum the results with the gyroscope values by applying a high-pass filter.

We build this filter inside the method Filter in the JBalancePI class, as shown in Listing 1. The variable angle_filtered is the θ angle:

For details about the mathematical formulas, please see this information.

It is very important that the MPU-6050 sensor's Y orientation is mounted parallel to the robot wheels, as shown in Figure 9.

The closed-loop control system is also referred to as a negative feedback system. The basic idea of a negative feedback system is that it measures the process output from a sensor. The measured process output gets subtracted from the reference set-point value to produce an error. The error is then fed into the PID controller, where the error gets managed in three ways.

The error will be used on the PID controller to execute the proportional term, the integral term for the reduction of steady-state errors, and the derivative term to handle overshoots. After the PID algorithm processes the error, the controller produces a control signal u. The PID control signal then gets fed into the process under control. 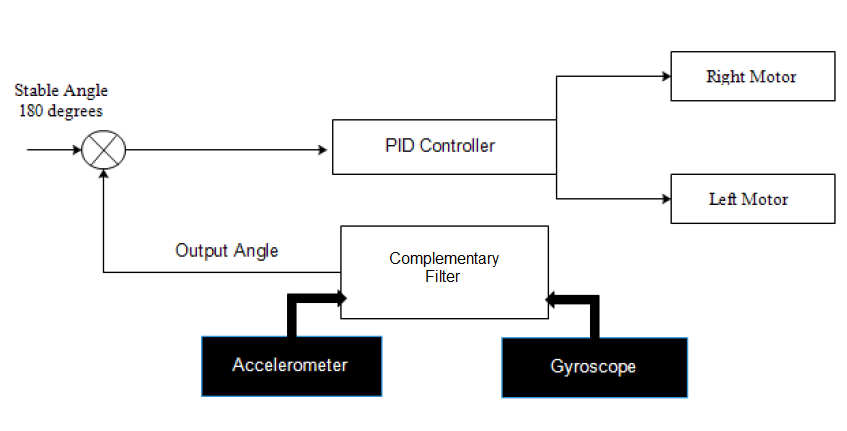 Here are some steps that will help us to get Kp, Ki, and Kd faster:

We build this PID controller inside method PID in the JBalancePI class, as shown in Listing 2.

Summary of the Code We Will Write

The PID controller produces the necessary data to create a PWM pulse to move the motors forward, move them back, or stop them. To do that, we create a class called L298Device that uses class GPIOPin and the class PCA9685Device from my previous article. See Listing 3.

Next, we define a constructor L298Device that creates a device at the defined GPIO pins and a PWM object, as shown in Listing 4.

Listing 5. Methods to move and stop both motors

To start moving the motors, we need set the PWM pulse to the desired frequency by using the pwm object, as shown in Listing 6.

Listing 6. Create PWM pulses at desired frequency for both motors

Using the L298Device class, we create a motor control method PWMControl that uses values calculated inside PID controller methods PID, LOutput,  and ROutput to control the movement, direction, and velocity, as shown in Listing 7.

Listing 7. Defining the type of movement and creating a PWM pulse for velocity control

Let's now complete the MIDlet class with startApp and destroyApp methods to initialize the complementary filter, the PID controller, the motor controller, the accelerometer, and the gyroscope, and create a task to balance the robot with the feedback control loop., as shown in Listing 9.

Before running our test MIDlets using NetBeans IDE 8.0.2, it is important to establish the appropriate API permissions. To do this, in the IDE, select project JavaMEDemos, and then right-click and select Properties to show the Project Properties window.  Select Application Descriptor, and then select the API Permissions tab. Include all the permissions shown in Figure 12. 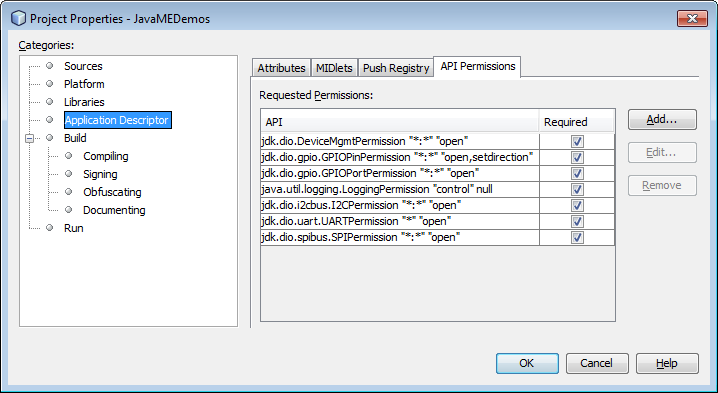 In this article, we saw how to construct a simple two-wheeled balancing robot using some modules such as the MPU-6050 accelerometer and gyroscope, the PCA9685 PWM servo driver, and the L298Nmotor driver.

It is important to establish some initial values for PID constants Kp, Ki, and Kd and adjust them until the robot is balanced. In the next article in this series, we will connect an OLED display and some buttons to modify the values dynamically.

We are opening a lot of possibilities for remote control of this robot, such as Bluetooth, Wi-Fi, REST, Twitter, web interfaces, and gestures with Kinect. In subsequent articles, we will see how we can implement remote control.

Jose Cruzis a software engineer who has been working with Java since 1998. He is a lead developer of Java, Java ME, and Java EE at Ferreteria EPA C.A. in Venezuela. From an early age, his hobby has been electronics. This has led him to combine computing with electronics and develop projects where Java and embedded devices such as Arduino and Raspberry Pi are used.