How can I avoid the below error when firing off multiple (< 5) Ajax calls using Dynamic Actions - Execute Server-side Code? 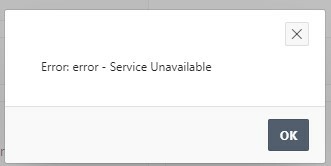 Are the requests timing out? Hitting some kind of limit?

I've tried setting "Wait For Result" to 'No' but that didn't seem to help. I'm on Oracle's AutoTP DB.