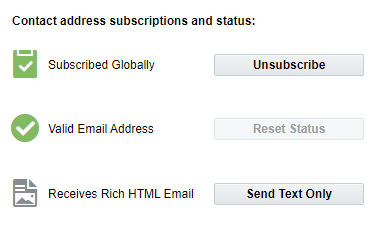 I've recently discovered, and have confirmed via an Oracle SR, that Eloqua Bounceback status and Eloqua Global Subscription status share the same back-end field despite appearing as separate in the UI.

This unfortunately has legal ramifications depending on how you address this issue.

This becomes an issue when globally opted-out accounts bounceback incorrectly and a transaction email (based on CAN-SPAM law) is needing to be sent. Since bounceback is not a status that can be ignored in Eloqua when sending an email, you have to reset the bounceback status, then re-unsubscribe the contact, then you are able to email them the transaction message by ignoring the global unsubscribe status.

We are investigating improvements on this for a possible future release.